The scariest thing that has EVER happened to me on a run...

On Sunday morning, I convinced Paul to go for a hike on the Appalachian Trail while I ran. "You're going to be inside watching football all afternoon and evening, you have to get outside this morning!" I told him. He agreed.

We drove to the trail head on Trindle Road. The plan was to run/hike North for 40 minutes and then turn around and go back to the car. We needed to be done by 12:30 because Paul forgot to set the DVR for his football games... Seriously!?

I passed by one woman running the same direction as me and 3 men who were running toward me. This was all within the first 3/4 of a mile so I was impressed with how busy the trail was! I was a little nervous at a part where there was some tall(ish) grass. What if a rattlesnake bites me? That would freaking suck and I would probably die.

I was fun running this section of the trail. I hadn't been on it in years. I soon got to the part that reminded me of the beach. There was dirt single track on small rolling hills with tall grass/bushes/brush on either side. I remember this part! Wow, it's been so long.

The animal SAW me. It's ears perked up and it stood at the top of the hill, looking at me. My first instinct was to turn and run. I turned and was about to run, but then I was like, Oh shit you're not supposed to run when you see a mountain lion. I'm so stupid. I turned back around and just looked at the animal.

I totally forgot all of the research I did on mountain lions. Guys, before I went to California this summer, I researched like every mountain lion attack in Cali for the past 100 years. I know what to do in the event there is a mountain lion, yet when I saw this animal, all I felt like doing was sprinting away.

The animal took about 6 steps toward me slowly, then turned right and walked into the tall bushes/brush. As soon as it walked into the brush, I turned around and I SPRINTED.

As I ran down the trail, I was convinced that any second, the mountain lion would leap out of the bushes and attack me. I was only about 1 mile into the trail at this point. I remembered there should be at least that one woman behind me running toward me. She couldn't be too far back. And then there was Paul too. As I sprinted, I called Paul on my phone. When he answered, I yelled, "There was a mountain lion on the trail! I am sprinting away! Run toward me please!" Paul said he'd run toward me and hung up the phone. I kept glancing behind me but I didn't see the animal. How I didn't trip and kill myself, I'll never know...

About 3 minutes later, I ran upon one of the guys I had passed before. He must have turned around to come back the other way.

"You're going to think I'm crazy, but I think I saw a mountain lion on the trail," I told him in between breaths.

Yes," I panted. I had been running like a bat out of hell. I already had a headache from my 3 minute sprint and my chest was burning.

HE'LL KEEP AN EYE OUT FOR IT?

Oh well, if that guy wanted to die, it wasn't my problem. I continued to sprint toward the car. Another 3-4 minutes later, I saw Paul, looking like he was just leisurely walking through the field. I was so relieved to see Paul but WHY WASN'T HE RUNNING AS FAST AS HE COULD TO SAVE ME???

I was a little pissed. I really thought I was going to die back there, and there was Paul just walking through the field, even though he said he was running and just stopped to walk. Must be nice to be able to stop and walk and NOT WORRY ABOUT A FREAKING MOUNTAIN LION CHASING AFTER YOU.

(Obviously I didn't want him to have a seizure but I also didn't want to be laying dead on the trail being eaten by a mountain lion!)

At this point I had a POUNDING headache and my throat hurt. I basically felt like crap. We walked the very short distance back to the car (we could actually see it at this point) and grabbed some water. I quickly texted my friend, Tammy, and told her I thought I saw a mountain lion on the AT. I asked her if there were actually mountain lions in PA. I knew she'd have answers for me... her husband worked for the fish and game commission and they are my go to when I have critter questions. 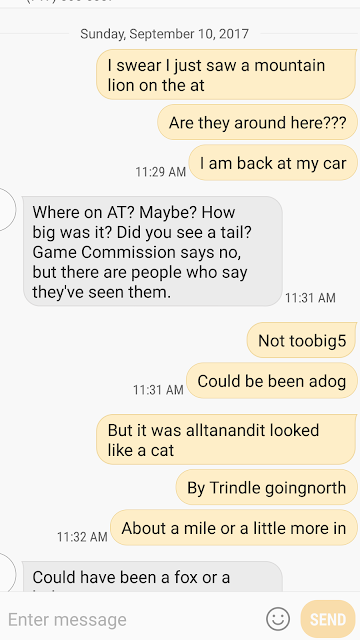 Then I got this from Tammy.... 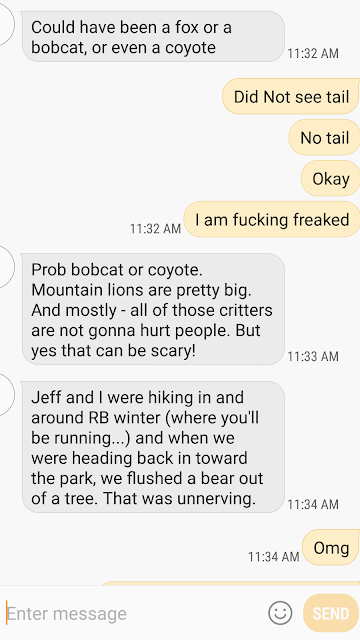 At the exact same time I was reading Tammy's text about her and Jeff seeing a bear, I heard a loud stick breaking in the woods.

OH HELL NO I WAS NOT ABOUT TO SEE A BEAR TOO!

I ran back to the car. Paul was still there. Time to go home, we decided. I finished my run in the safe neighborhoods of Shiremanstown...

Later on in the day I decided I saw a fox. It looked like this but bigger, I swear. 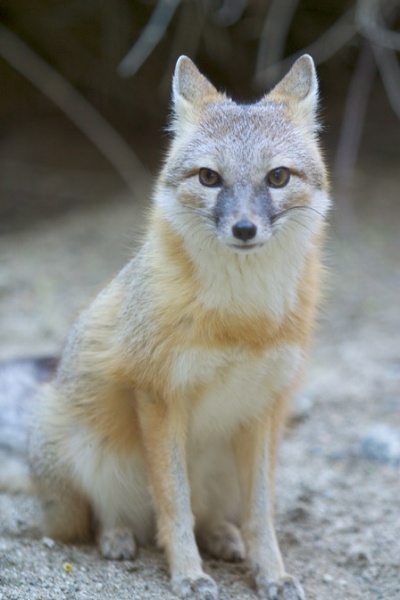 What's the scariest thing you ever saw on a run?
Posted by Meg Go Run at 5:30 AM