On Sunday, I ran the Dam Half. Guys, it was very hard! It was harder than Table Rock thanks to the gnarly elevation we were dealing with. I can't believe there used to be a Dam Full to go along with the Dam Half. You would certainly have to be a Dam Fool to run the Dam Full. I could not have WALKED the half course again, let alone RUN it again!

I got up at 5:20am on Sunday morning. I didn't sleep well due to excitement. I was out the door by 5:35 and made the trek North to RB Winter State Park. I had to pull over on the side of the road to pee once. There was nothing open that early for me to stop at!

When I got to the park, I didn't have to park too far from registration. I picked up my bib, my awesome sweatshirt, and then went back to the car to get ready. I wasn't hungry at all due to a late dinner at Red Rabbit the night before. I forced myself to eat an apple and 7 bites of bran flakes. Then I headed for the start. 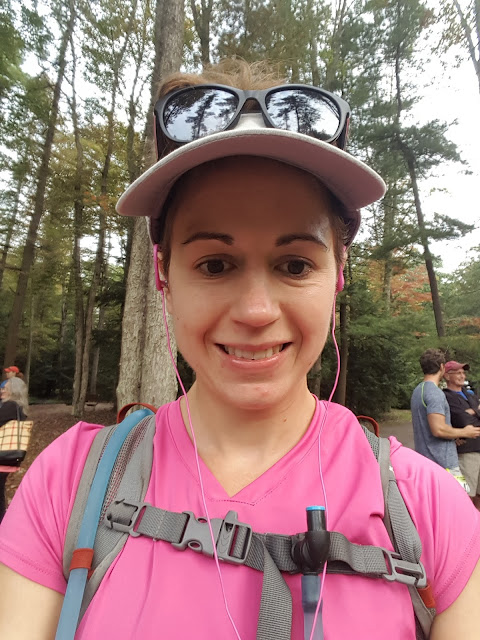 About five minutes before the race started, one of the race directors stood on a picnic table to tell us that the course was marked with orange tape. The dude was actually kind of negative though. He went into some sort of spiel about how like 95% of the runners he dealt with are great but the other 5% get upset when he is not able to respond to emails quick enough in the days before the race. It sounded like the guy had a bug up his butt and it was kind of annoying to hear that negativity right before the race. I should have listened to my Big Brother podcast rather than his cry baby rant. 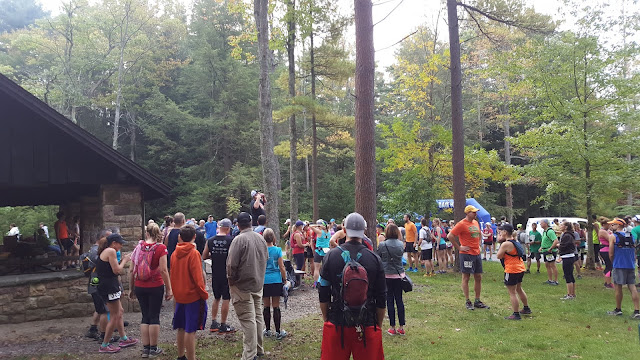 But then the race started! It was annoying at first, as trail races usually are. You're all trying to find your own pace yet it's hard to pass people and get into a groove because it's so congested. People are hacking loogies and snot rockets all over the place and it's just gross. I'm proud to say I have never in my LIFE hacked a loogie or a snot rocket. I think that is so disgusting. I do shit in the woods though, but not on this day. In fact, I didn't have to go to the bathroom at all during the race. You know why? Because I carried toilet paper with me. If I hadn't had my toilet paper, I would've had problems.

Then came the first hill. Straight up and through big boulders. I was pretty sure on a normal day rattlesnakes would hang out here. It got congested as we went up the hill. It reminded me how there is a bottleneck at the top of Mt. Everest and everyone has to wait their turn to summit. 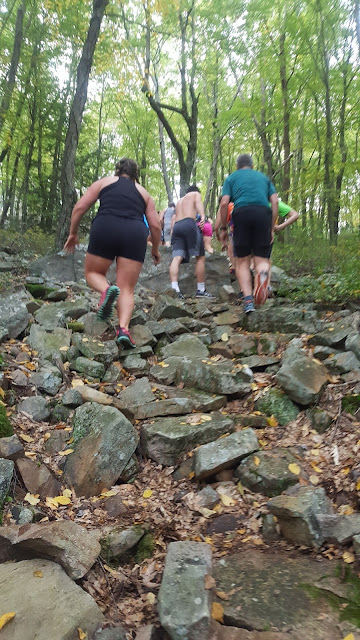 The next couple miles went back and forth between easy trail and ROCKY trail... the rocks that will turn your ankles. I had to be careful. I passed a couple people at this part and a couple people passed me. We all had our own strategy to not get tripped up by the rocks. Things thinned out a little bit but I still got caught behind some slower runners and I slowed some people down too. It was all single track.

All of the aid stations were really well stocked with water, Gatorade, snacks, and people to cheer for us. The first aid station was at Mile 4 but I felt like I had already gone about 7 miles! I wore my hydration pack but at the aid stations I double fisted Gatorade. No food for me. After the first aid station, we were thinned out a lot and most of the time there were runners near enough for me to see. This section of the run was really dark and secluded. There is no way I would've run here were it not a trail race. I am sure there were a ton of bears hiding from us!

I heard the second aid station before I saw it. They were rocking! It was only mile 8. My legs were like JELLY due to several STRAIGHT UPHILL sections. The only time I walked was when the hills were straight up or straight down. I am not one of those trail runners that just barrels down a rocky hill. No, I tippy toe down so I don't kill myself.

I was very relieved when I got to the last aid station at Mile 10.8. I didn't look at my Garmin at all during the race, only checked in on the mileage at the aid stations. I knew the steepest, longest hill was coming up, but the hill was far worse than I could've ever imagined! My legs were extremely weak at this point. So were my feet and ankles. It was hard cardio wise but it was also hard to stand upright without my legs collapsing! We gained 700 feet of elevation in one mile. It was wicked. I passed some people on the way up but they passed me on the way down! There were dudes taking breaks on the way up the hill... sitting on the ground and leaning up against trees. If I would've sat down, I wouldn't have been able to get back up! I didn't see any women taking a break on this hill... just saying!!!!! 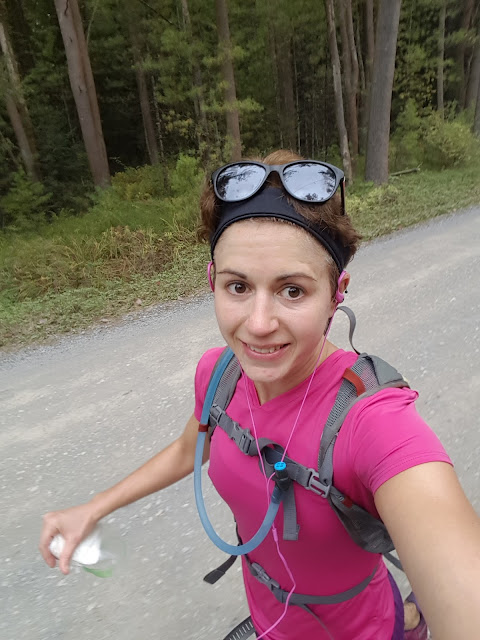 Mile 11, right before the dreaded hill! Oh, how hopeful and optimistic I look!

The rocks were so big, and when we got to the top, there were more rocks... and then rocks going down. It was very hard to stay upright at this point. I would've gotten a picture but honestly I was using every muscle in my body to stay balanced and upright, there is no way I could've taken a picture!

Finally, we were on our way back down... very steep at first, but then run-able. There were ankle twisting rocks, but as soon as the trail evened out, I gunned it. I knew the finish line was about a half mile away, I may as well use whatever I had left in the tank.

I love sprinting to the finish in a race! I feel so bad ass!!!

I don't know what my finishing time was... I didn't even look! But after I got all my food I took a picture of the finish and it said 2:51, so I was probably in the 2:40s for my finish. 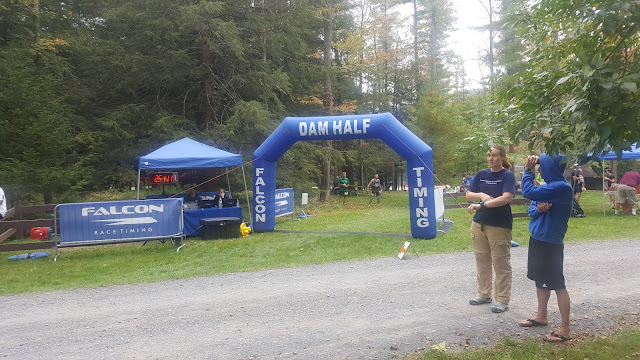 Sometimes I am nervous after a race because I have a headache and my heart is pounding. What if I have a heart attack!? Why did I sprint to the finish!? I was fine, I was just freaking myself out. I walked to the car and put all my food in the Tupperware container I brought. I planned to eat it on the way home just as soon as I was hungry. 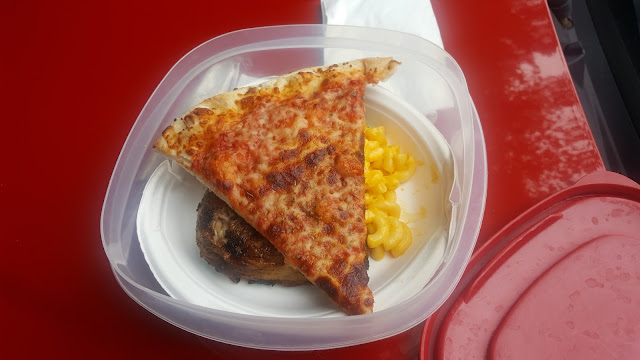 Pizza, pasta salad, mac salad, corn bread, and there was a big piece of chicken under the pizza!

I walked back to the beach area of the park and got into the cold lake up to my waist. I knew it would be good for my muscles, especially because my calves were about to seize up and I had a long car ride home. There were other runners taking advantage of the lake. I did go under the whole way. I can't believe I did that! 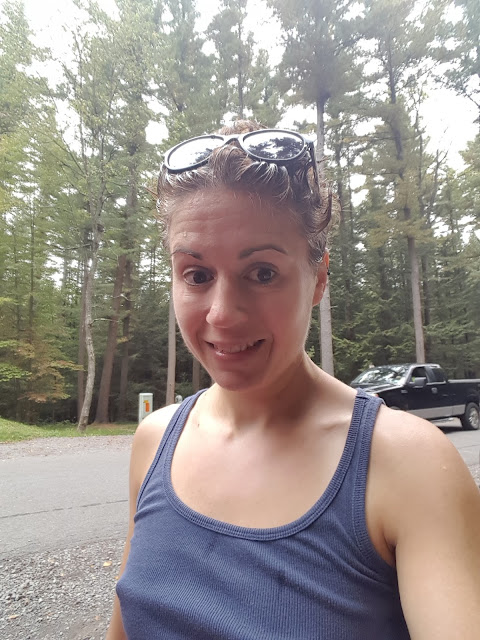 Luckily my calves didn't end up seizing and I made it home safely. I even stopped at the grocery store!

When I got home I relaxed. My legs were so tired, I had a headache, and I had the apprehensive post race feeling. But I was very happy with how I did! 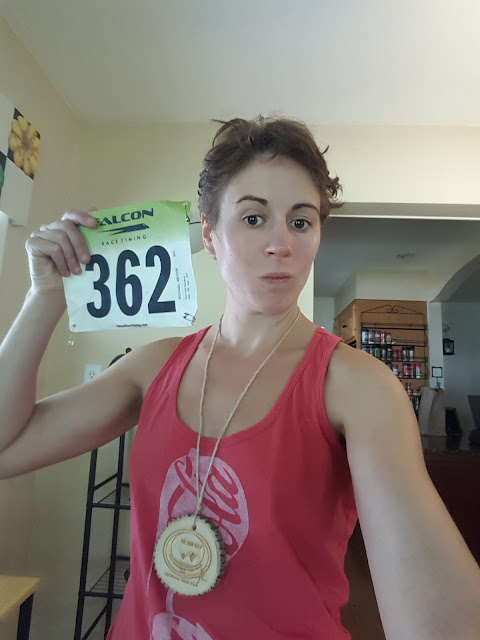 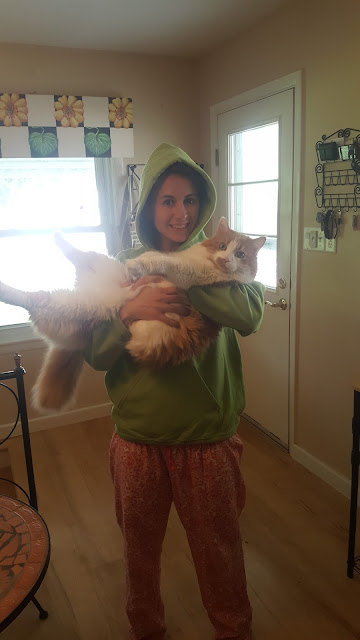 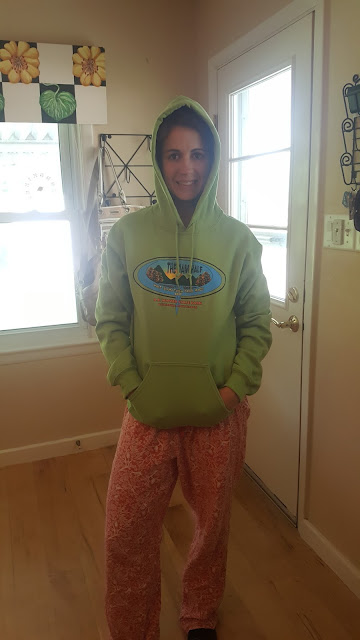 We got a sweet sweatshirt!
Oh, and I lost my visor somewhere on the course! Oh well. It was $3 from Wal Mart.

Have you ever hocked a loogie or a snot rocket?
Posted by Meg Go Run at 5:30 AM