On Saturday morning, I got my ass out of bed and ran a race with my dad in Mifflinburg!

There were two options for this race- The Resolution Challenge or Last Man Standing. Participants of both races ran a 1.6 mile loop over and over again. Those running the Resolution Challenge had 3 hours to complete as many loops as possible. My dad chose to do this race. Last Man Standing was a bit more interesting: Runners had 20 minutes to complete the first lap, 19 minutes for the second lap, and so on. You were not allowed to start laps early. Winners would be the last 3 men and last 3 women to complete a lap- whichever lap number that ended up being! This is the race I chose to do.

Both of us did Last Man Standing last year and it was a fun time. This year did not disappoint either.

Since I HATE the lead up to races because I am wracked with anxiety and pooping problems, I never sign up for things ahead of time and don't even write them on the calendar. As I finished my 6 miler on Friday morning, I suddenly remembered I was thinking about racing the next day. Oops. I had already run 35 miles for the week. That's not much of a taper. (I really like to taper!)

I got up quite early on Saturday and left the house with plenty of time to drive 1.5 hours to RB Winter State Park. Unfortunately, I thought I left my Garmin at home, so I drove back to get it. It turned out I had it all along!

My turn around and multiple bathroom stops on the way to the race resulted in me only arriving a half hour early. I thought there wouldn't be many participants because it was freezing cold (14 degrees!) but there were a lot of people! I had to wait in line for the bathroom and then wait in line for at least 15 minutes to register. Unfortunately while I was waiting in line, my toes became completely numb. This was not good! 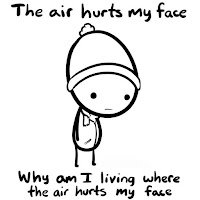 After I was registered, I literally had just enough time to run back to my car, put on my compression socks and all my warm gear, grab my bag, and run back down to the start. I told my dad my toes were frozen already and he told me to go into the pavilion and stand by the fire until the race started.

My toes did not unfreeze but the race was about to start! Unfortunately I was caught way in the back of the pack, and since the first half of the race was on a narrow(ish) trail, there was no way for me to get around people. This was good and bad. 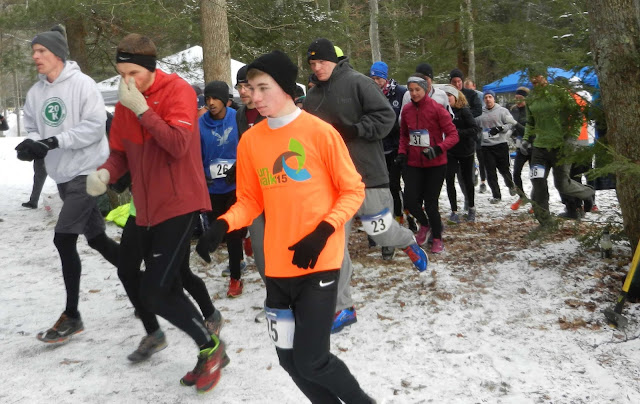 It was good because it forced me to go slow and get the lay of the land. There was snow on the trail and some spots were VERY icy. I was a little skeptical of how many laps I was going to be able to complete in those conditions!

The bad part was I was looking down at my pace and actually wondered if I was going to finish the first lap in time due to being stuck in the back! (Runners doing the Last Man Standing and the Resolution Challenge start at the same time, so there were many people who planned to walk/run for 3 hours and didn't need to be done with the first lap in 20 minutes.)

Since the second half of the course was on the road, there was plenty of opportunity for the crowd to thin out and settle into a comfortable pace, which for me on the slippy road was about a 9:30. There was no reason to run fast. My goal was to complete at least 8 laps, since that's what I did last year. 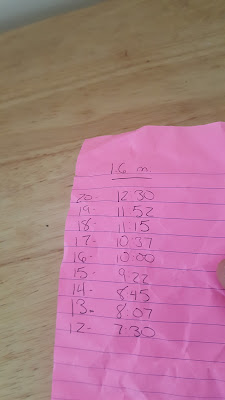 I wrote out the paces I needed to keep and kept it in my pocket.

Towards the end of the second lap, my toes felt better and I was feeling confident running in the ice and the snow. But since I didn't have a buddy to run with, the whole time I was running I was thinking about the race and how hard the last two laps were going to be! So after my second lap, I grabbed my mp3 player and listened to Ezra Klein interview Obama about the Affordable Care Act. I know, I am weird. But seriously, Obama's voice calmed me down and I was able to zone out.

I didn't eat during the race, but after each lap I had water or Gatorade. There was a big picnic table of goodies. It was so cold the water was freezing! I got to see my mom after each lap. She was our cheerleader/eye candy. I also peed after every lap except my second to last one. Laps 1-6 were basically run with what felt like the same exertion to me. On a scale of 1-10, my exertion felt like a 4-5. Depending on the lap, I had anywhere between 4-2 minutes to spare. Sometimes I would stop running before the lap was over and just walk it into the finish line. It felt weird to do that, but I figured walking would be better than just standing around! 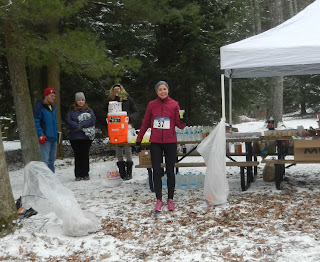 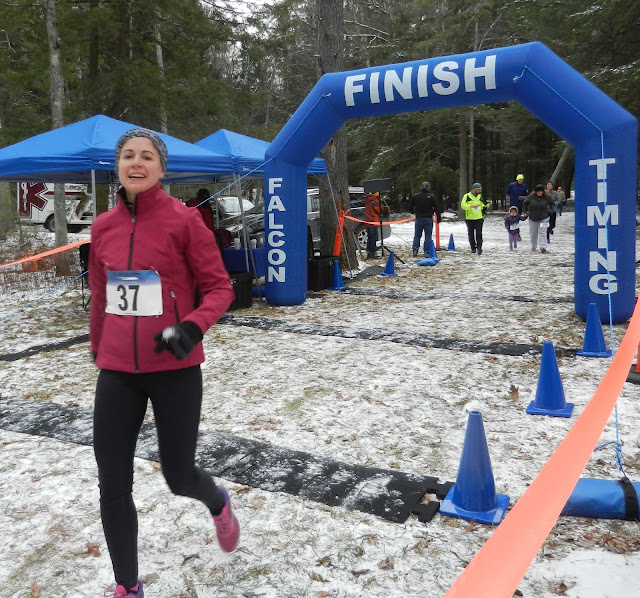 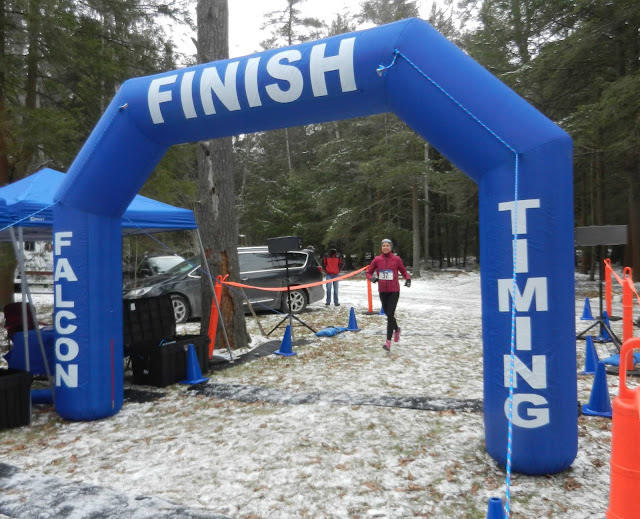 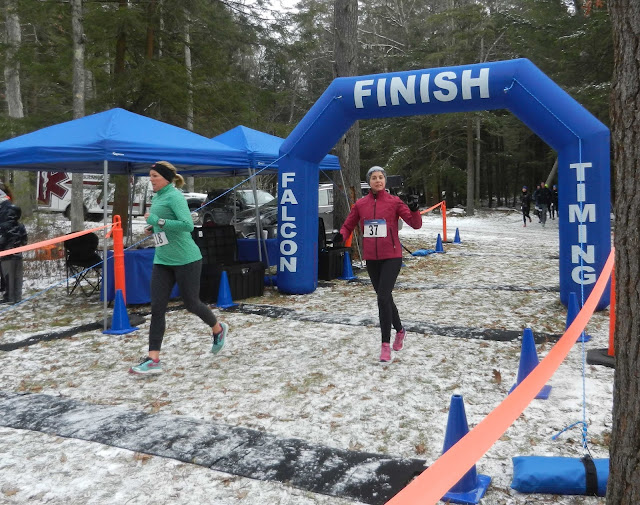 The 7th lap had to be at an 8:45 pace, so I did have to push myself a little on that one... maybe like a 7 on the exertion scale. I didn't feel tired yet, so this lap wasn't too painful. The conditions on the trail just weren't that great (I almost fell twice and others did fall), so I would always end up running in the mid 9s on the trail portion and then make up time on the road portion.

There were a lot of strong female runners out there, so I was pretty sure I wasn't going to place this year. 1/4 of the way through my 8th lap, it really hit me. I was tired. I was pushing myself. I knew I'd be able to get the lap completed in 13 minutes (8:07 pace) but I was going to have to work for it. I ended up finishing the lap with a couple seconds to spare. The whole time I could barely see. My eyes were watering from the cold. I did not fall, though! This was an 8 on the exertion scale for sure... maybe more.

I could have started a 9th lap (there were some men and at least 5 women doing so) but at this point, my muscles were very tired and I knew I did not have 1.6 more miles at a 7:30 pace left in me! I mean, I guess if you had a gun to my head I could have done it, but I was really freaking tired and was ready to be done. My heart just wasn't in it. I already had a pounding headache and didn't have another 1.6 miles in me!

I began my 9th lap walking until my dad caught up with me. Remember, this whole time he was running loop de doops as well! He was on his 10th lap. 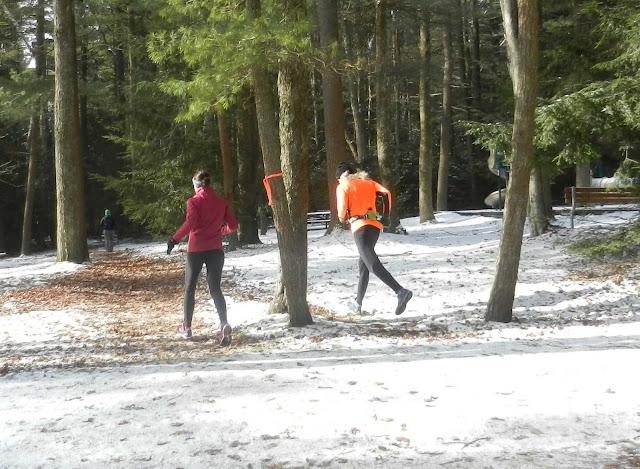 I ran the rest of his 10th lap and an 11th lap with him. There were only 11 minutes left in his 3 hour race so he decided to stop after his 11th lap. He was definitely feeling it. I was too! I was so ready to be done! All in all, I ran 16 miles (OMG I HAVEN'T RUN THAT FAR SINCE THIS SUMMER!) and he ran 18 miles. THAT'S THE LONGEST HE HAS EVER RUN! DISTANCE PR FOR MY DADDIO!!! 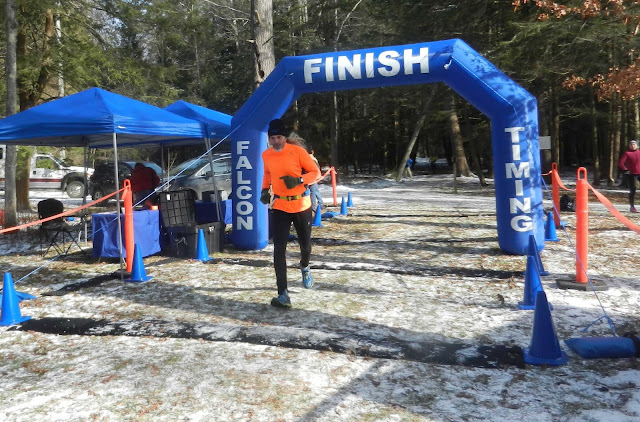 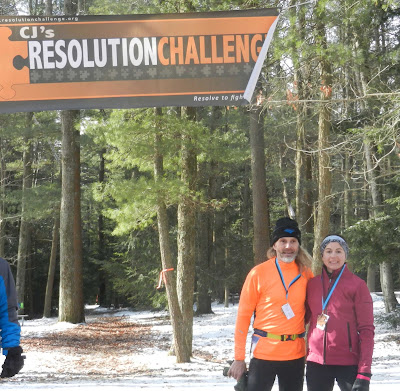 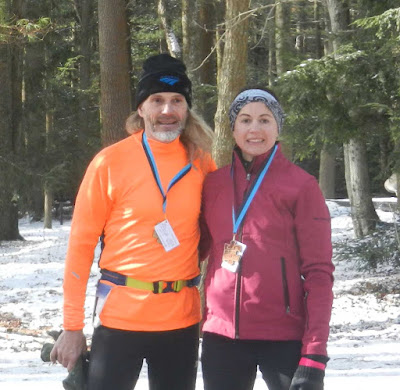 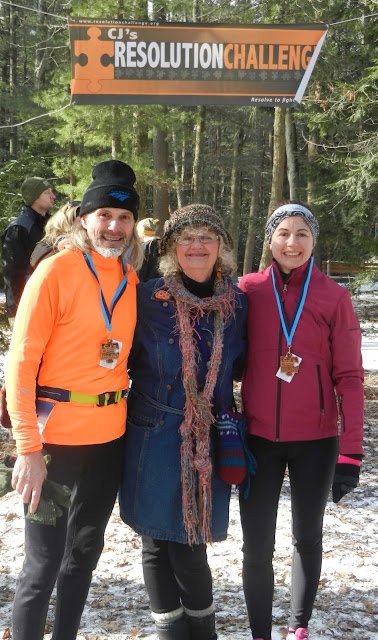 Even though we didn't place, we were very happy with our performances. We stuck around for the awards ceremony and then hit the road. I was feeling very tight and I knew the drive home was going to be a bit painful! I started to get really freaking hungry so I stopped at Sheetz and got a huge burger, rye chips, and a Diet Mountain Dew. I LOVE CHEMICALS! 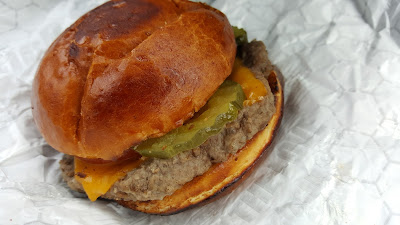 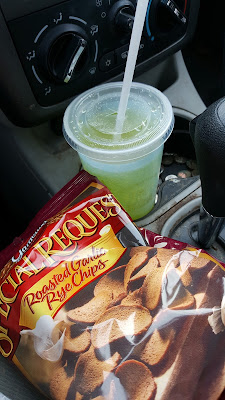 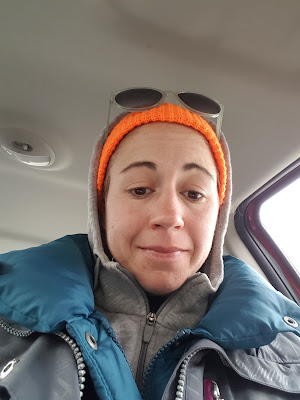 This is my OMG I GET TO EAT A BURGER face! 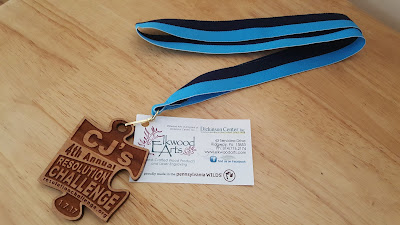 The medals were made out of wood- very cool. 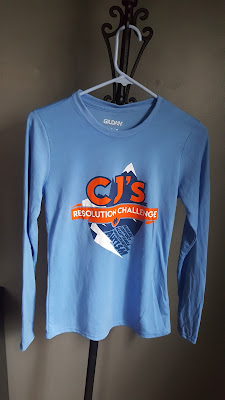 We got a shirt, but after looking at mine when I got home, I realized I should have gotten a medium. This small is very... small.

Have you ever run an unconventional race?
What's the coldest you have ever raced in?
Posted by Meg Go Run at 5:30 AM