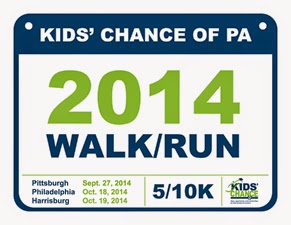 Sorry if this recap is a little disjointed/rushed/whatever. I have not been able to get my heart rate down all day! I am feeling quite jittery but I wanted to get this posted! My normal Weekend Wrap Up will have to wait until Tuesday.

I also realize this re-cap is VERY LONG, so you can just scroll through the pics if you like and I included the cliff notes version in bold at the end!

On Sunday, I ran my first race since Boston and my first 10k EVER! It was the Kids' Chance 10k in Harrisburg. I picked this race because it coincided with the training plan I created and it didn't start until 2:00. Also, since it started on City Island, I figured the course would be relatively flat.

I had all sorts of plans to sleep in, but it turns out, when I am really excited and nervous for something, I simply can't sleep! I woke up at 7:23. But instead of getting up, I laid in bed with the kitty cats and finished reading a Christopher Pike (young adult horror author!) novel I had started a few days before. It was nice to just zone out for awhile.

When I finally got up at 10:30, the butterflies really started. My brain knew I trained as well as I could for the race, but I still get nervous whenever I set any type of running goal for myself. That is probably why I don't race very often. It is too stressful. To pass the hours before we had to leave for the race, I did the following...

1. Drank a lot of coffee.
2. Picked out my race outfit.
3. Went to the bathroom 232 times.
4. Made spaghetti.
5. Blogged.
6. Set out my clothes and packed my lunch for work the next day.
7. Fueled up with some shredded wheat. Wished I had the frosted kind!

You see, I am very good at distracting myself!

Paul and I arrived at City Island, Harrisburg, around 1:00. I know that is a little early, but I still needed to register. Plus, I planned on using the bathroom at least ten more times before the race started... 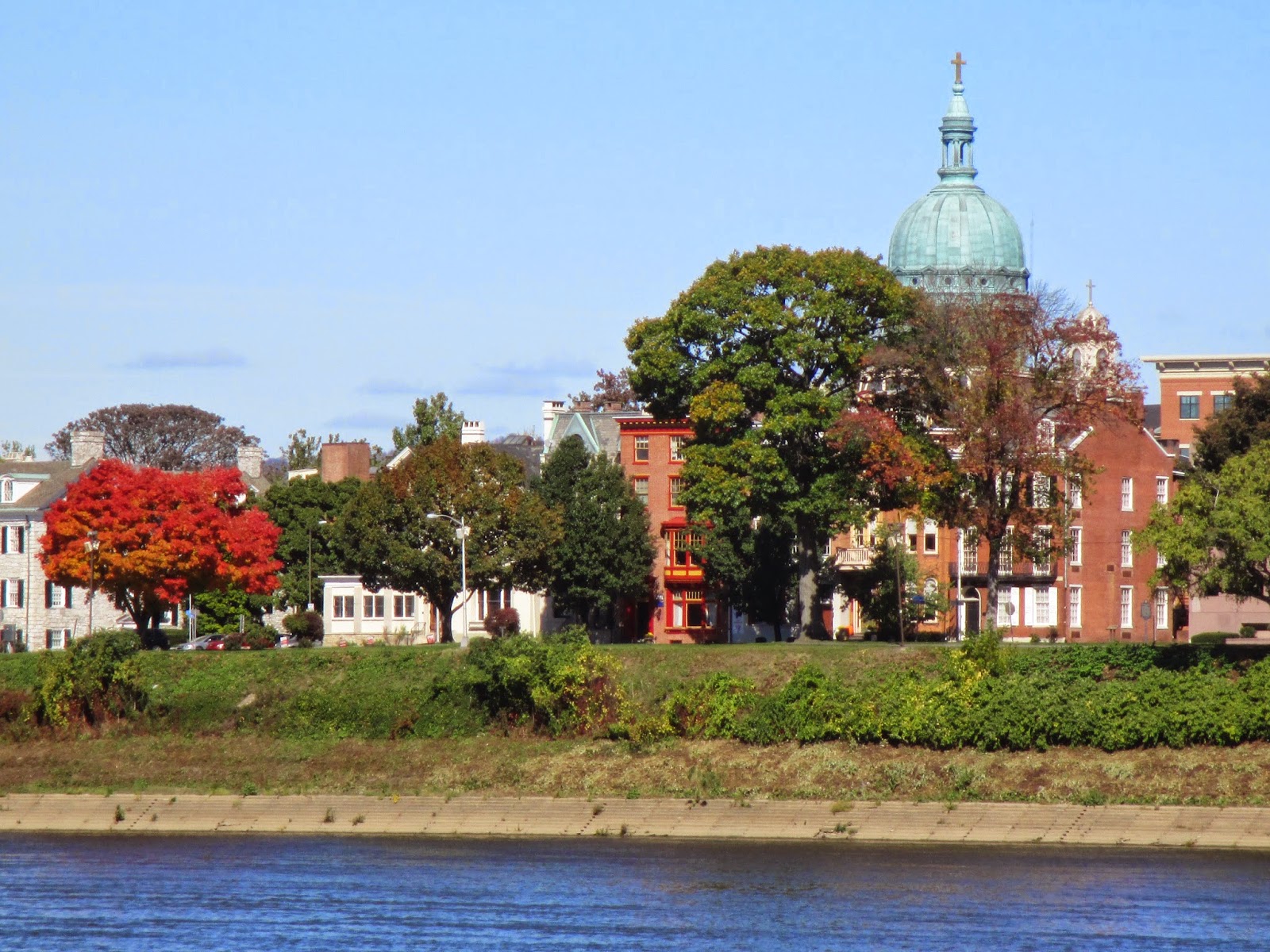 Harrisburg can actually be pretty! 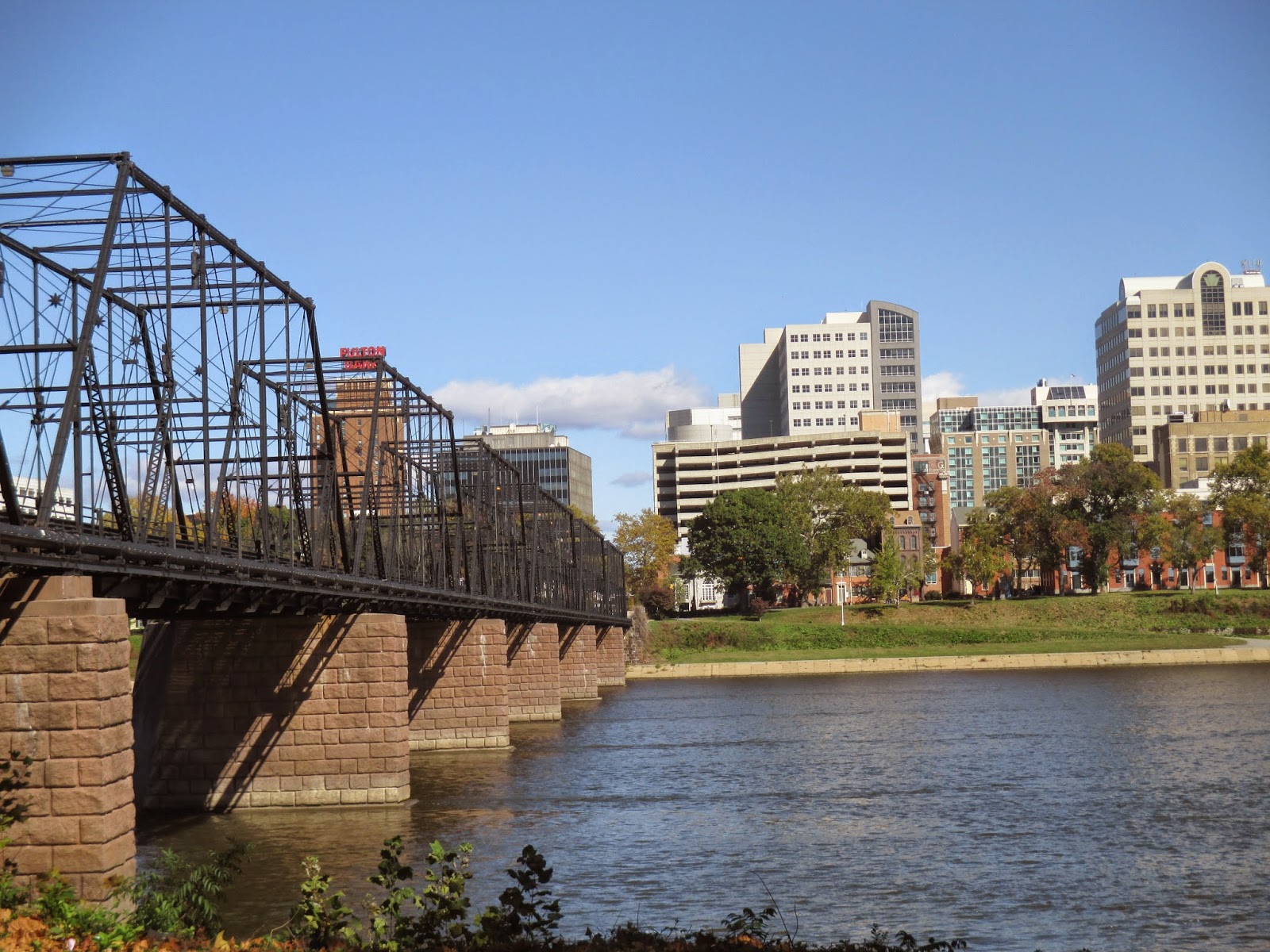 It was cool, sunny, and quite windy. Near perfect fall conditions for a race... minus the wind! I bundled up so I wouldn't be cold before the race started. My parents and brother arrived to cheer me on. I knew my parents were coming but I didn't know my brother was coming. It meant a lot to me that he came out! 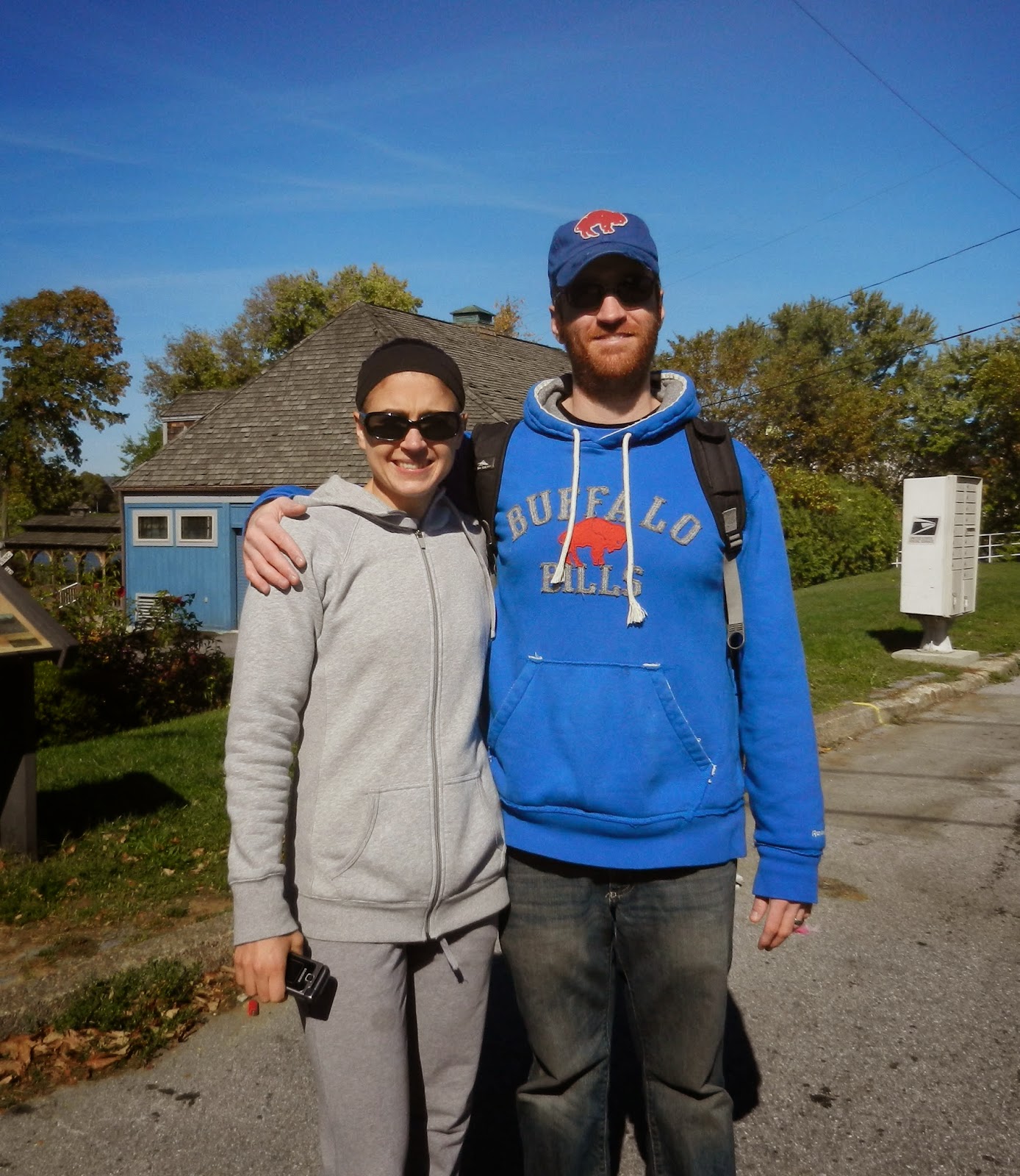 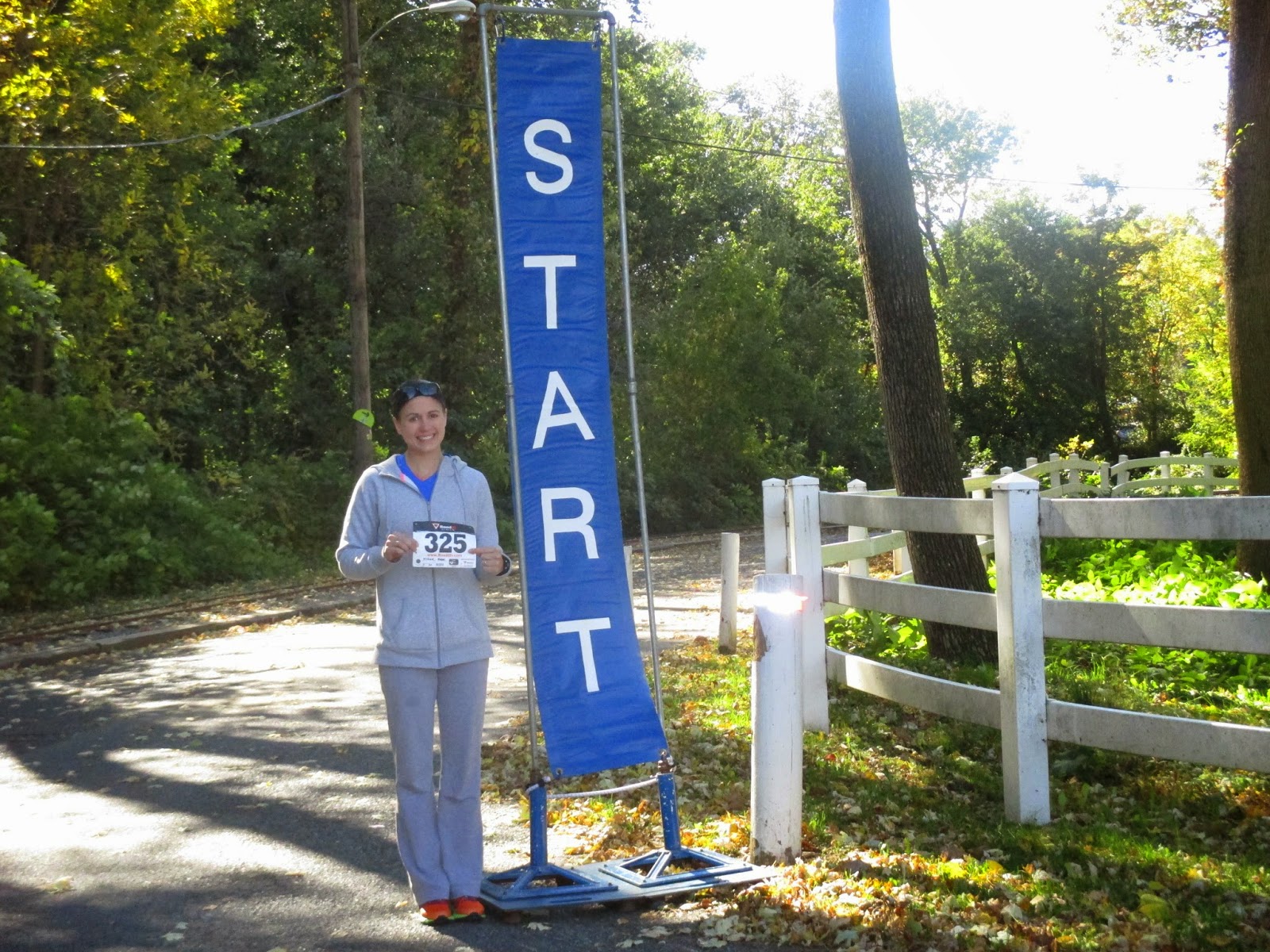 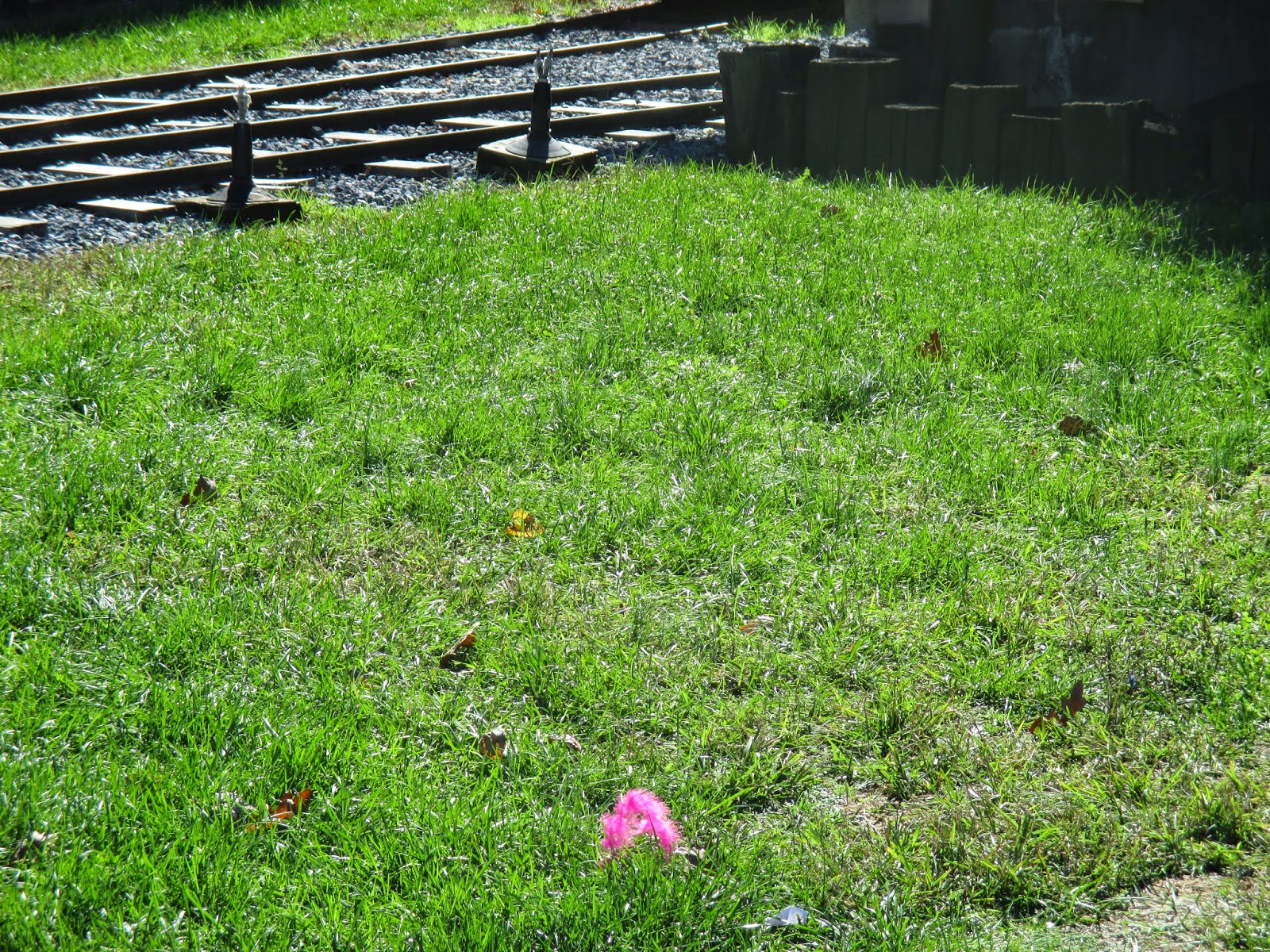 The Breast Cancer Walk was the day before so there were pink feathers
everywhere... even in the port-o-john!


Oh, I also ran into The Best Zumba Instructor In The World before the race! She was running the 10k @ 2pm and then planned to be at her Zumba class to teach at 3:30pm. PS. She PR'ed! 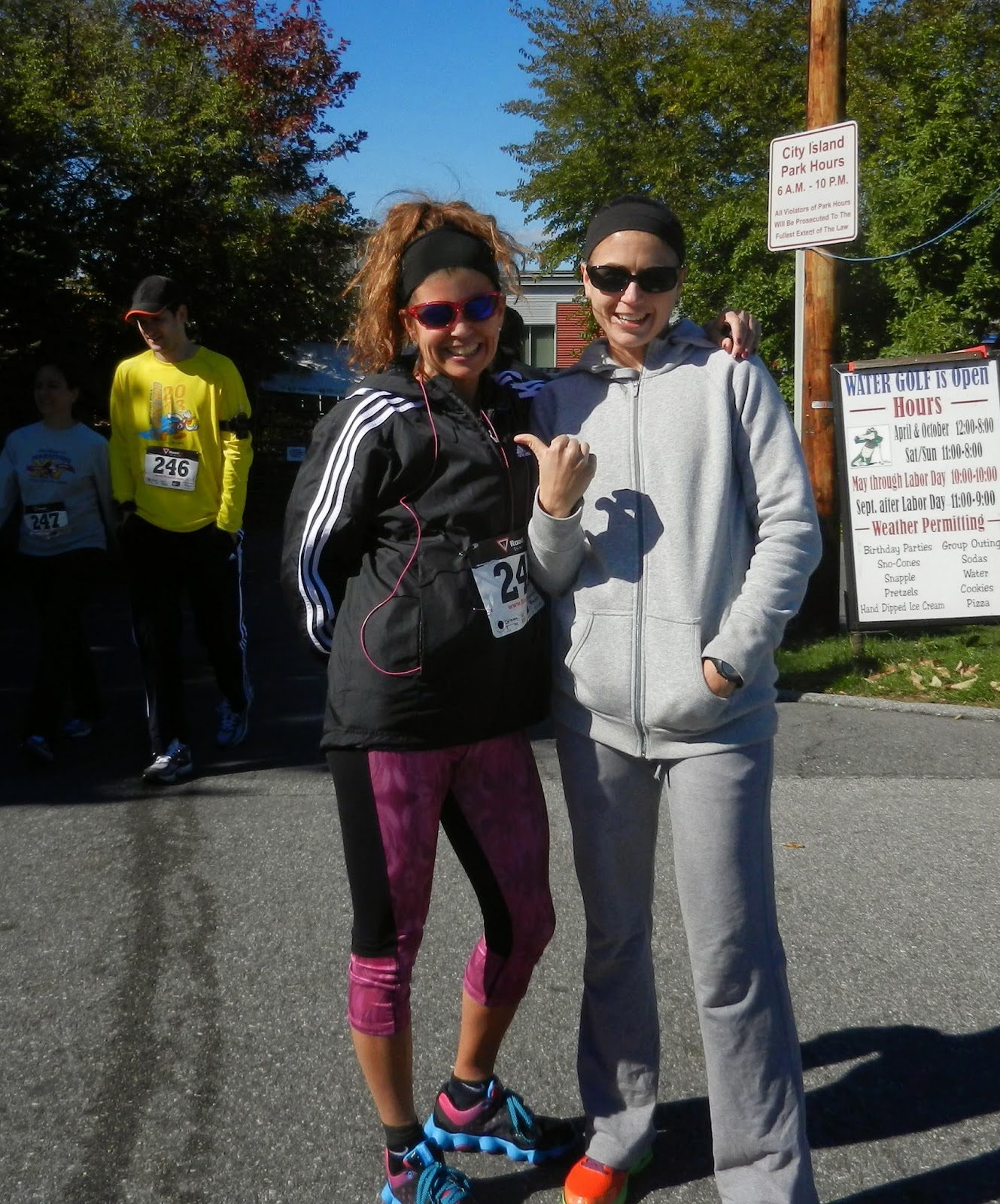 At the starting line, people were jumping, stretching, and doing the normal pre race chitter-chatter. My pre race starting line MO is just to stand there with my arms crossed. 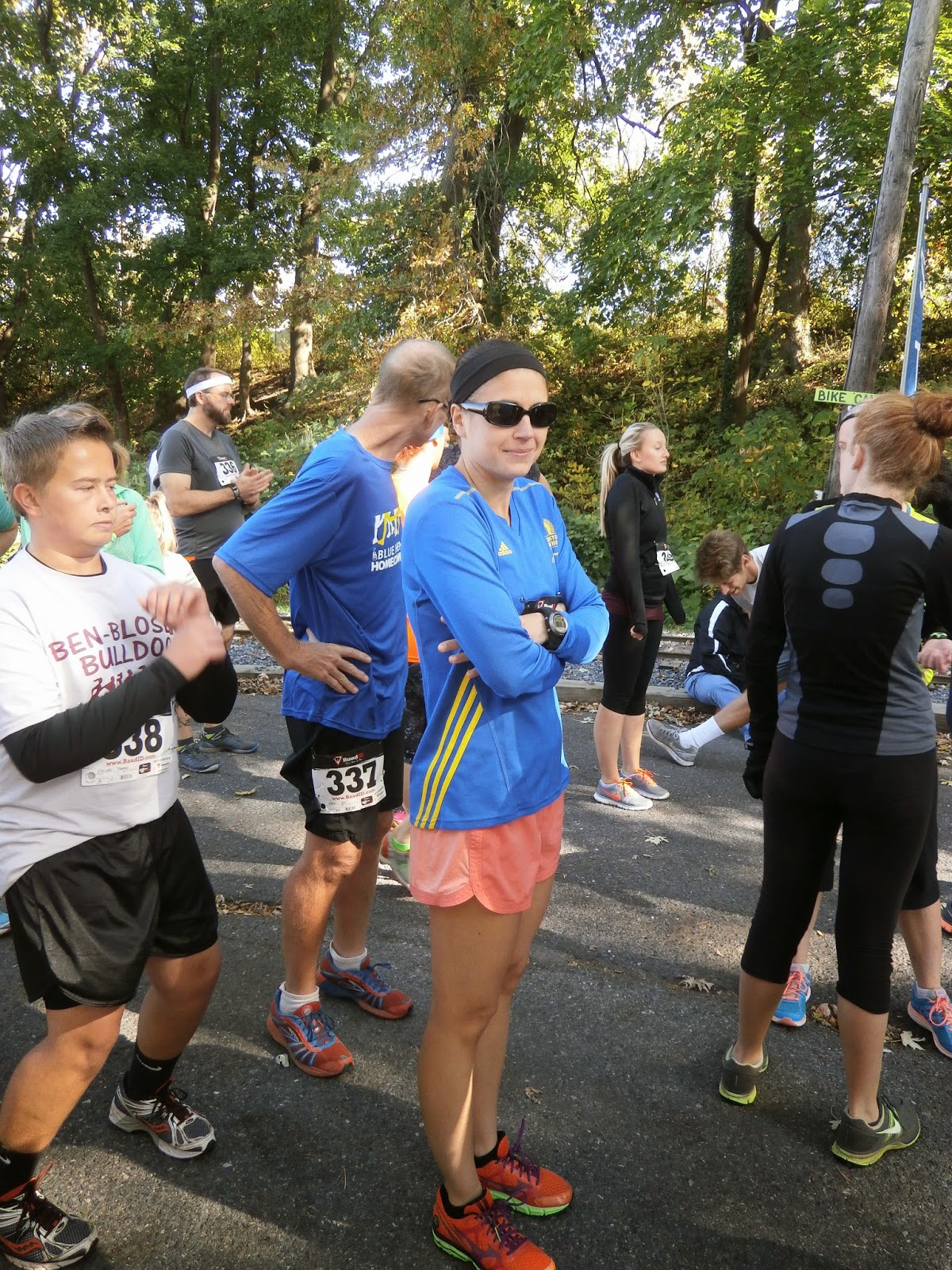 I will be completely honest with you: The only time I felt "good" during the race was the first mile loop around City Island when we were relatively protected from the wind. Once we got onto the walking bridge and headed north along the river, it sucked. You see, the wind was blowing right in our faces. There was so much resistance. I was running a 7:10-7:16 mile but it felt like a 6:30. It was very hard to catch my breath.

Here are some early in the race shots where I feel happy and like the world is my oyster! 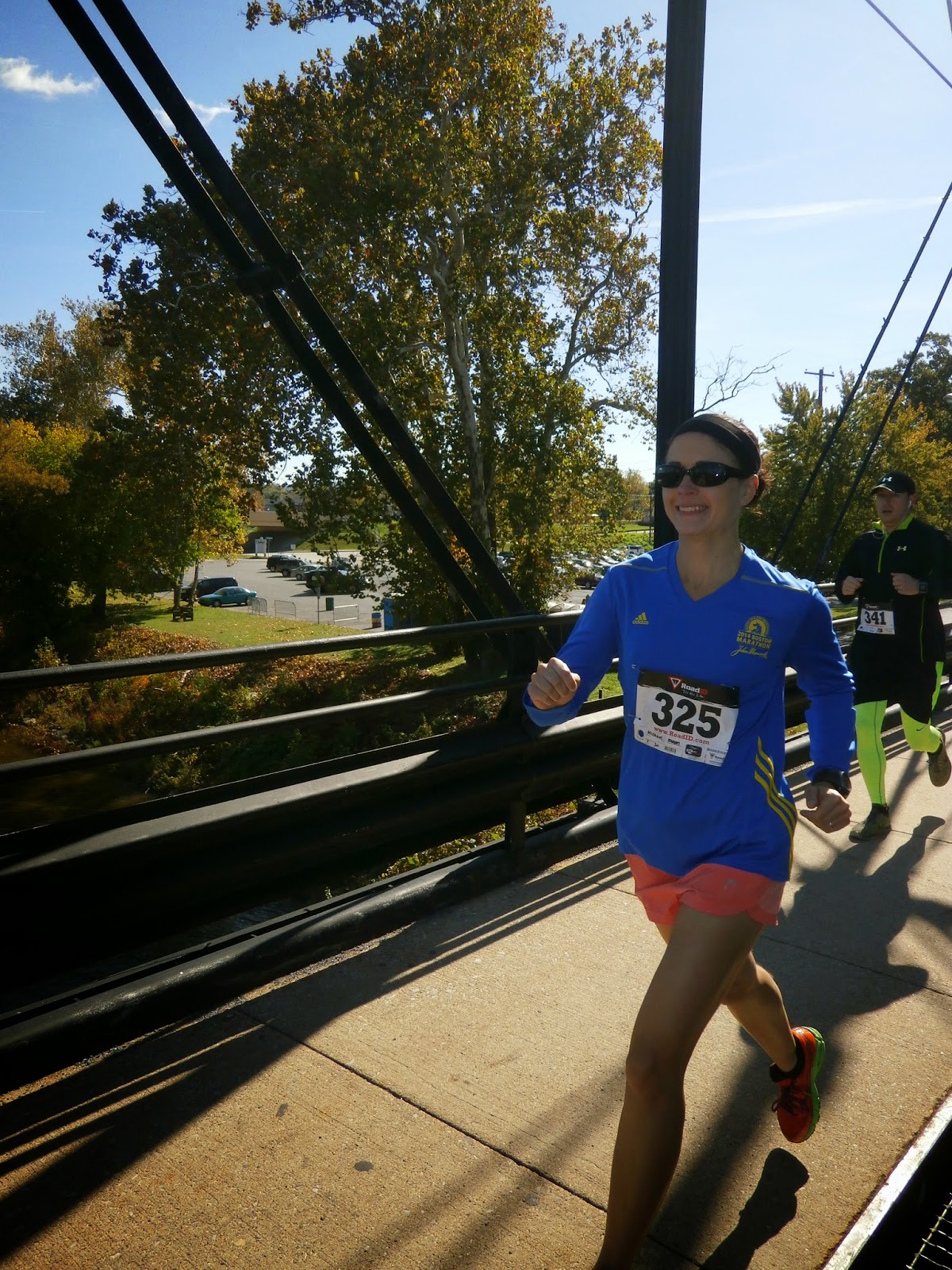 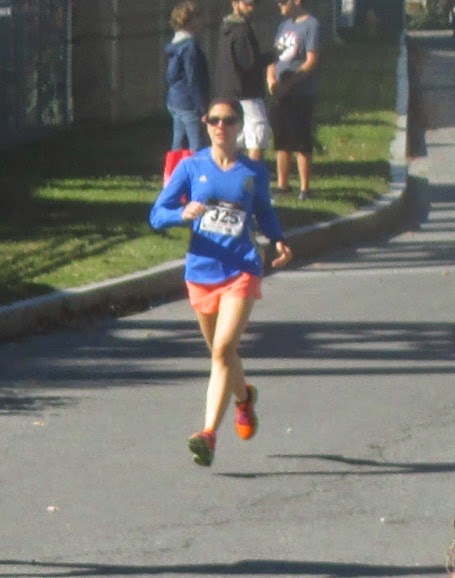 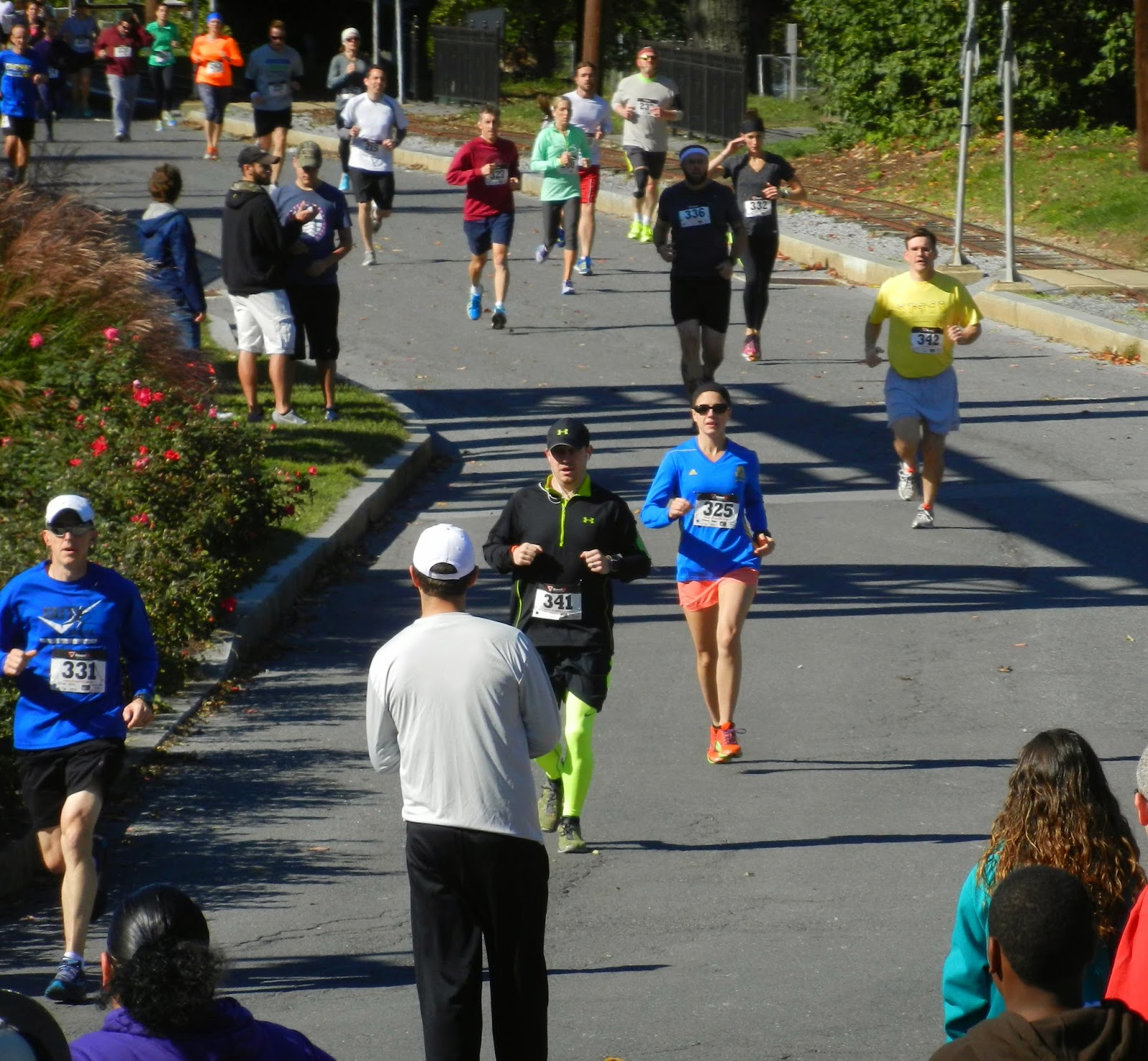 Annnnnnnnnnnd my splits... you can tell we were running into the wind the first part of the race!

This race was a 10k/5k, and you could make your decision in the middle of the event. If you opted for the 5k, you turned around about a mile and a half before the 10k runners. When the race started, there were several people ahead of me. Some of them were those really fast skinny guys with 2% body fat that run like a 17 minute 5k. There was one woman ahead of me too. All of these people turned around at the 5k. "Okay, I guess all the speedy people are running the 5k today!" I thought to myself.

A guy passed me just after the 5k turn around, but I ended up passing him less than a minute later. I was in the lead from about Mile 2.25 until the end. But it didn't occur to me I was in the LEAD, lead. I was pretty sure I was the first woman since the other one turned around and did the 5k, but I figured there were more guys ahead of me. But then again, I could. not. breathe. so I could barely think clearly.

I almost missed the 10k turn around, as there was no sign that said "TURN AROUND!" and the distance on my Garmin indicated that I should probably run a little father until it was turn around time. But some lady with water yelled "This is the turnaround!" so I quickly went back the way I came. Yeah, the race was a little low budget but it was for a good cause!

The way back to the island was much more pleasant. I still couldn't breathe, but at least I was running faster than I did on the way out, thanks to having the wind at my back. I saw my little brother when there was about a mile to go. He told me I was in the lead and the next person was like 100 yards behind. I still thought I was just the first woman. And I did NOT want to know who was behind me. I wanted to run my own race and not worry about others. 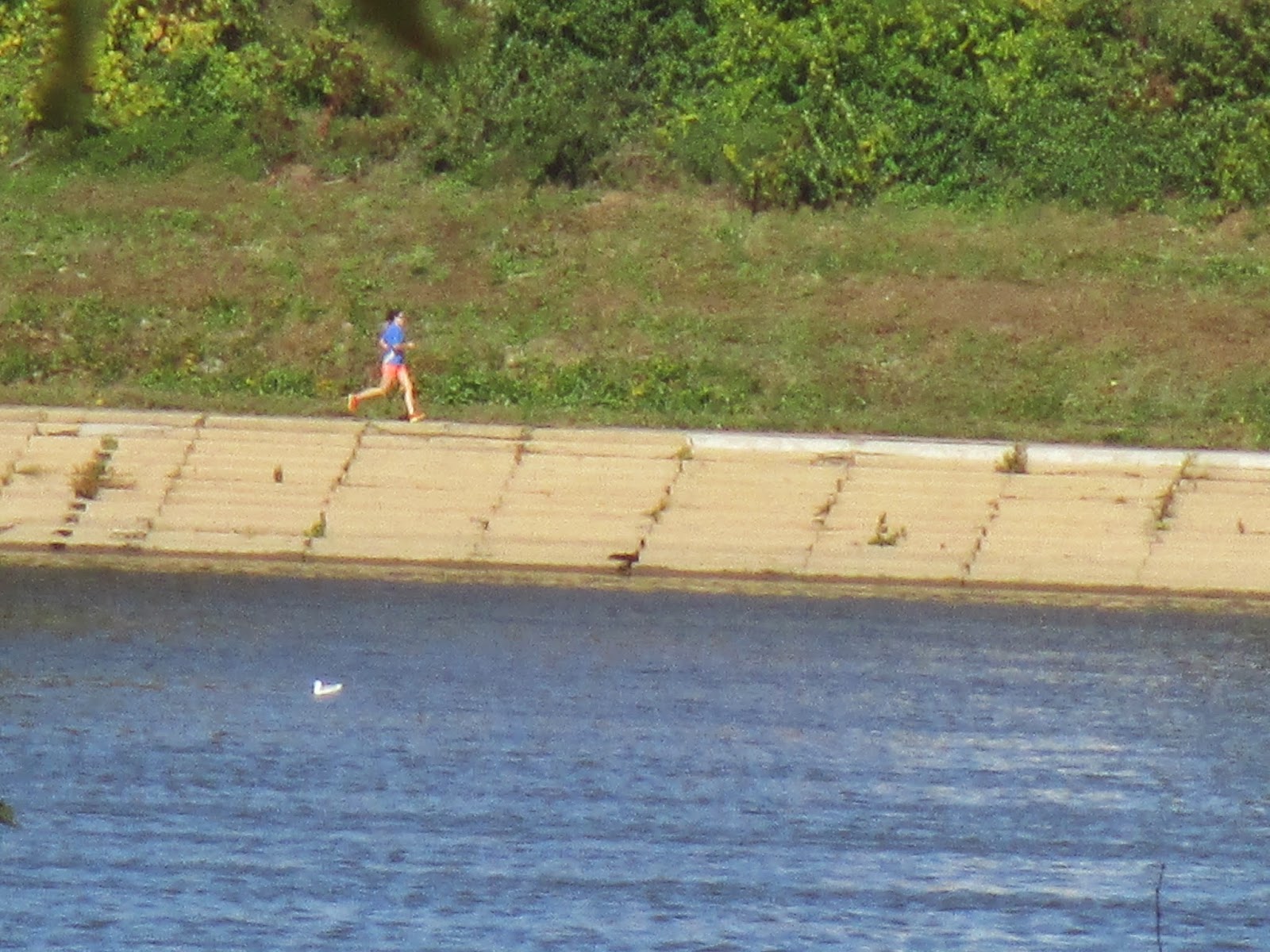 Clearly on my own! 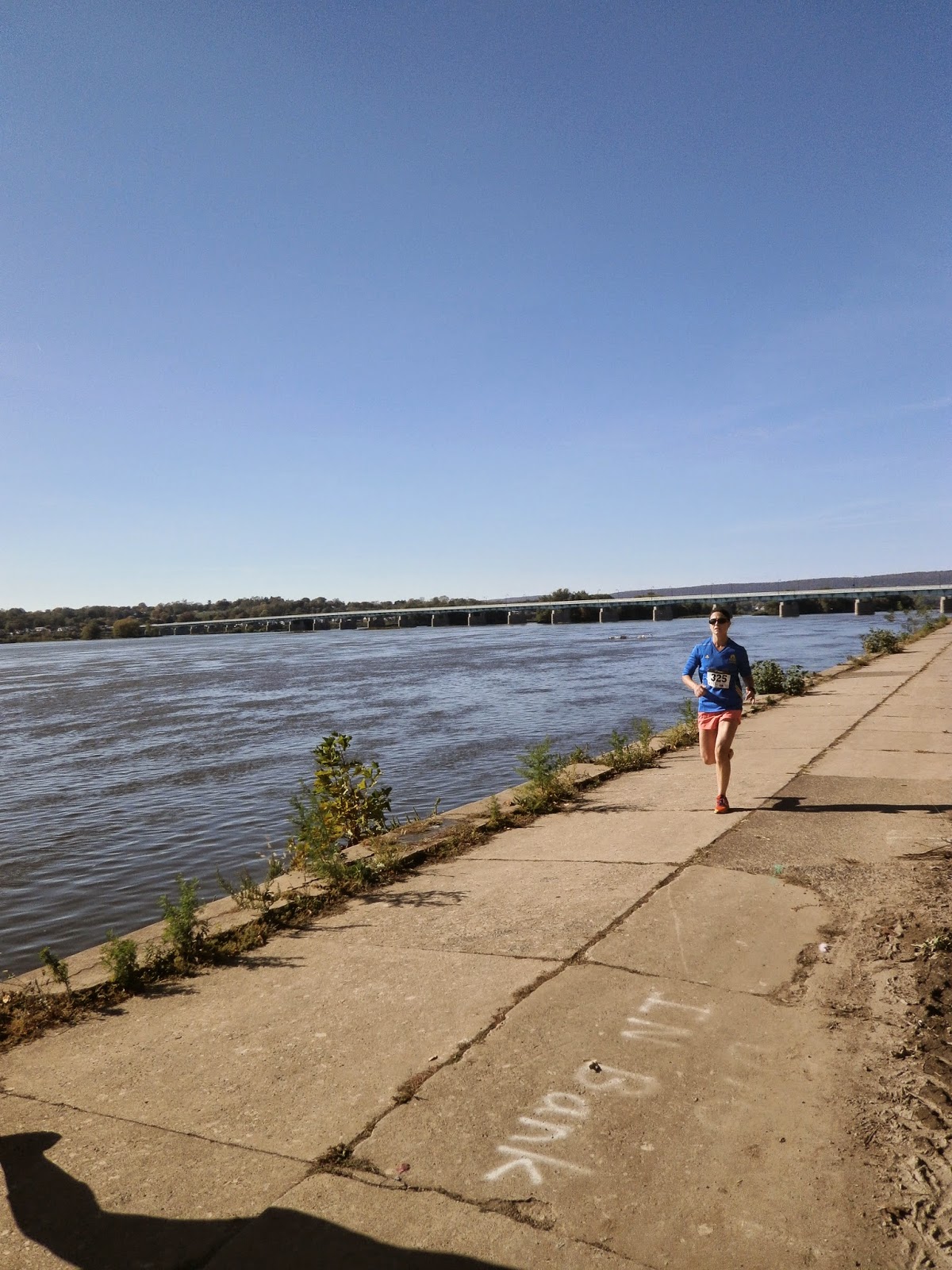 This is when my little brother jumped out of the bushes and informed me I was in the lead! 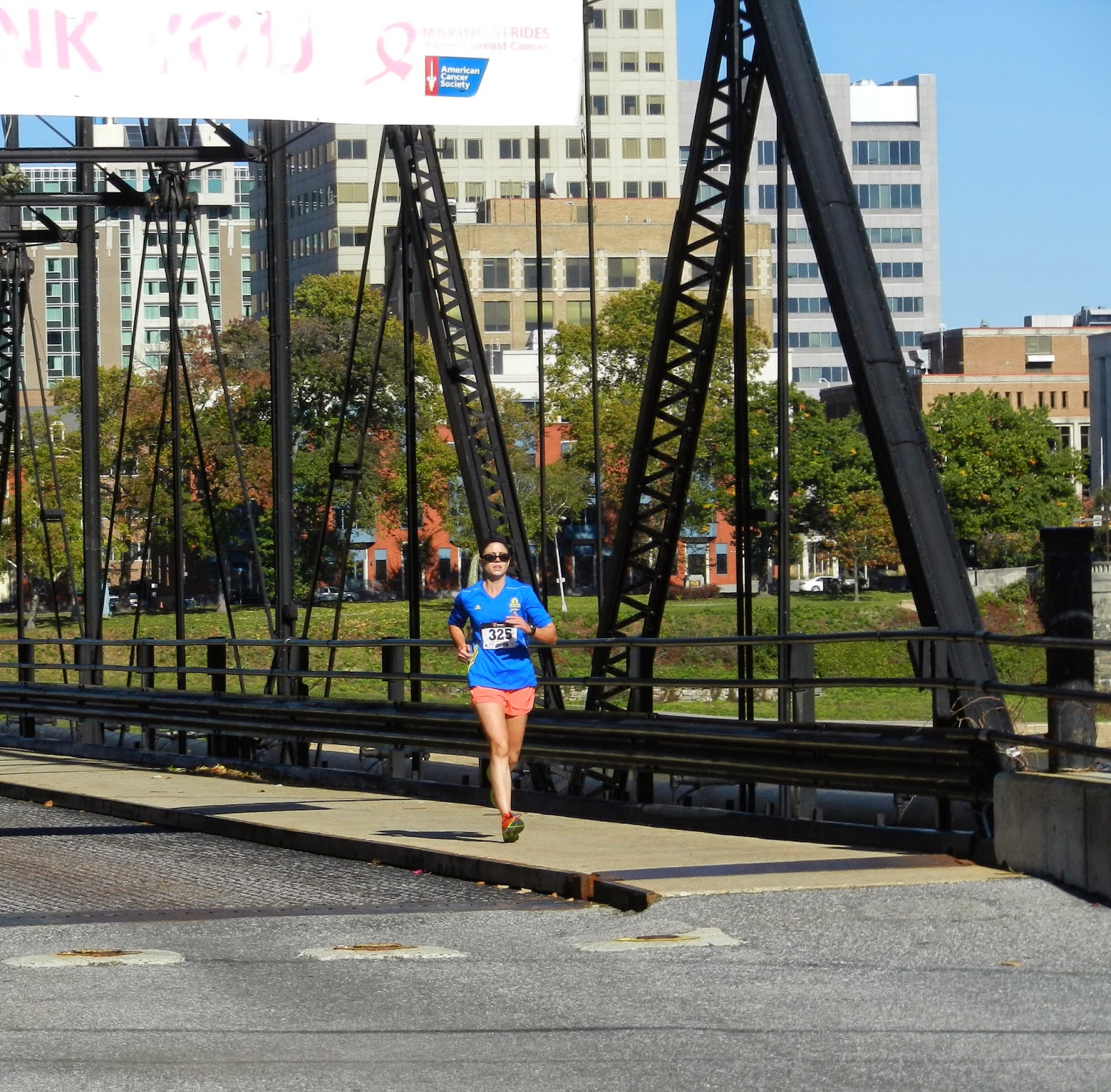 Almost at the finish... no one in sight! 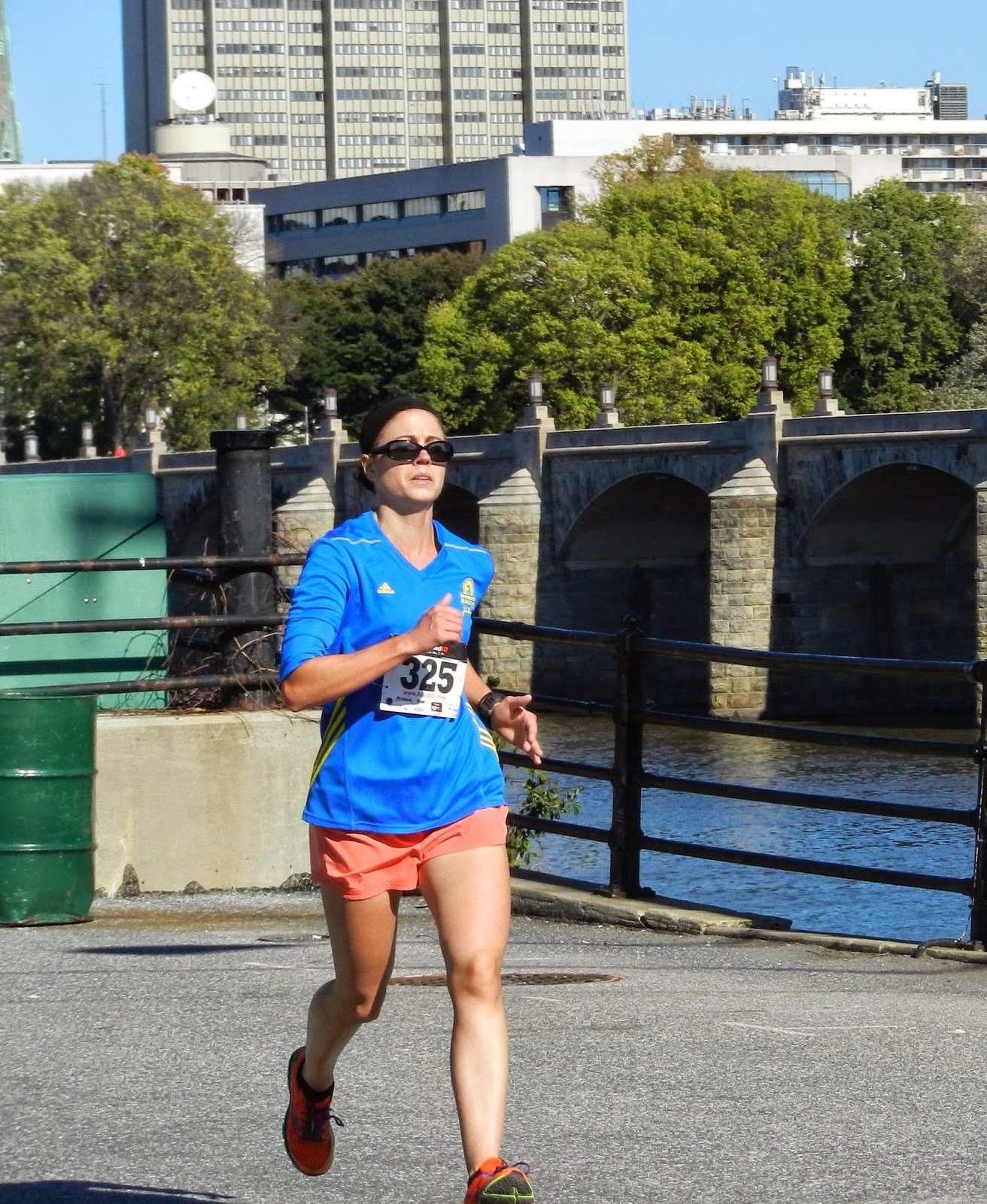 I really pushed it the last half mile. I literally ran as fast as I could without my lungs bursting. I wanted to give it my all and leave everything on the course. It was not pleasant, but I knew it would pay off when I got to the finish line. I was overjoyed to round the corner and see the time on the clock was well under 45 minutes!

But here is the bad part... my Garmin said 5.92. And everyone else's Garmin had the race cut short as well.

I was not only ecstatic to be done running, but I was so happy I was the first female and the FIRST OVERALL!!! However, I was really bummed that it was NOT a 10k.

Nevertheless, I was pretty happy... 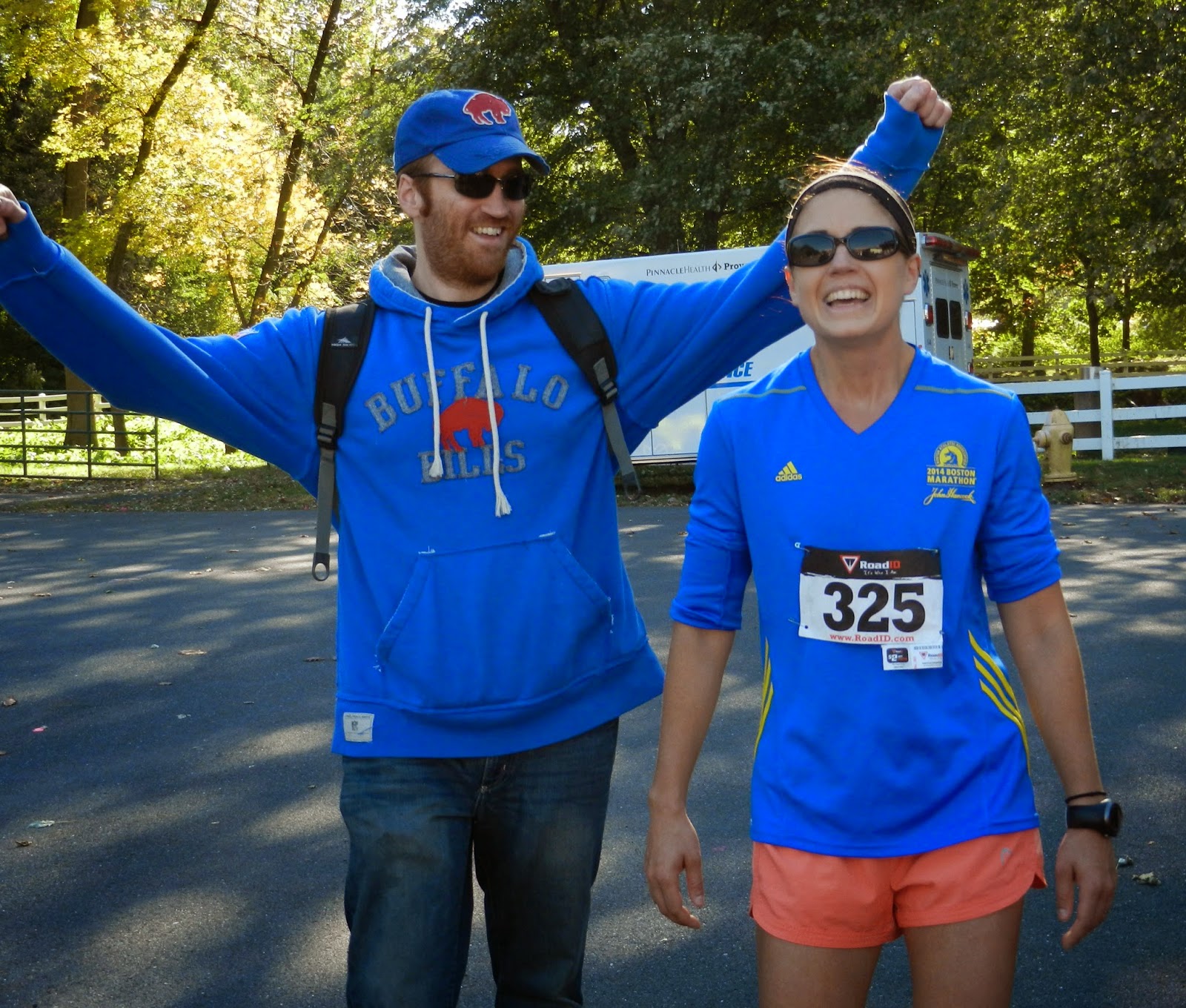 I freaking love this picture of us! 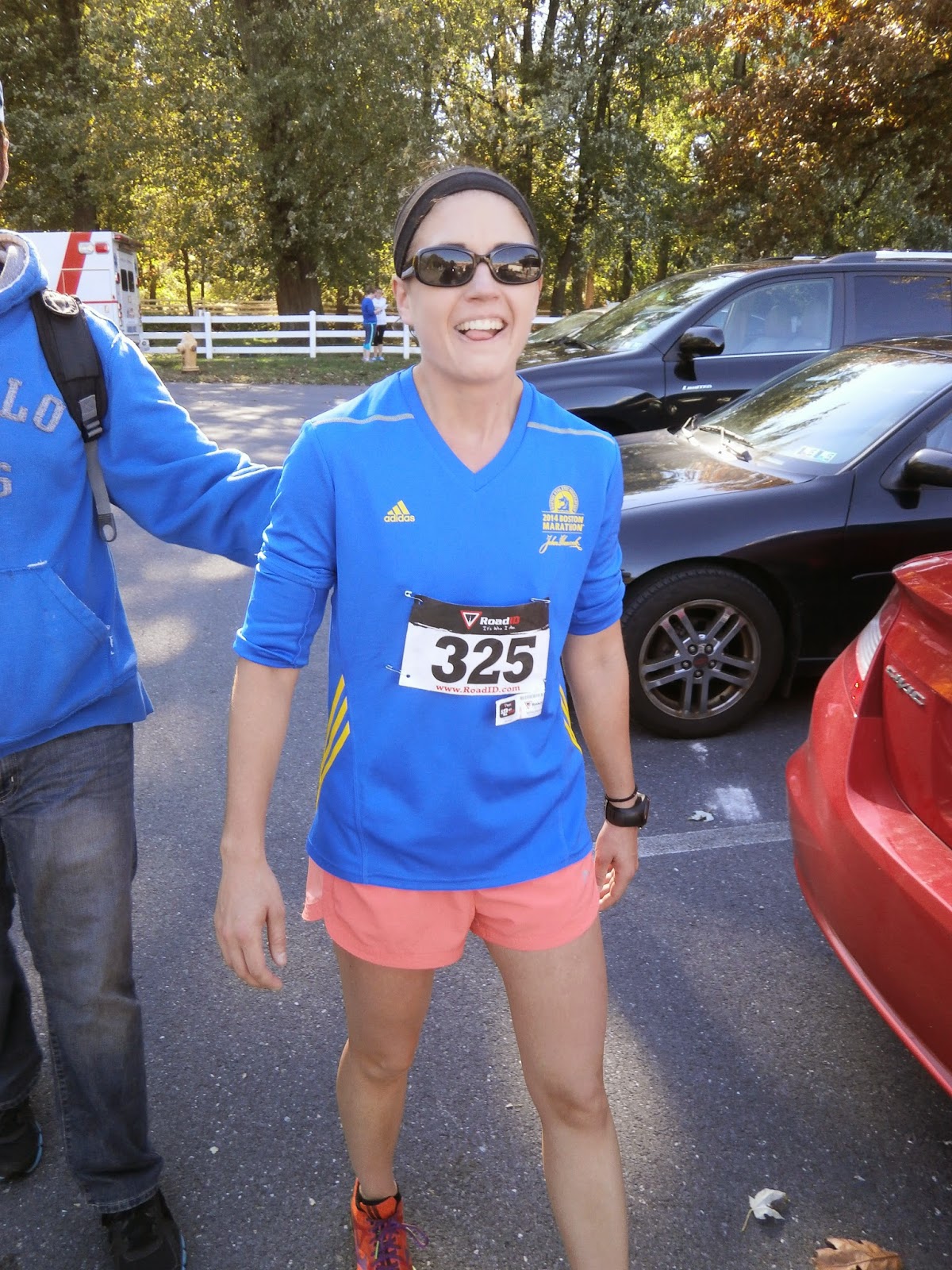 I'm a lip licker when I run. 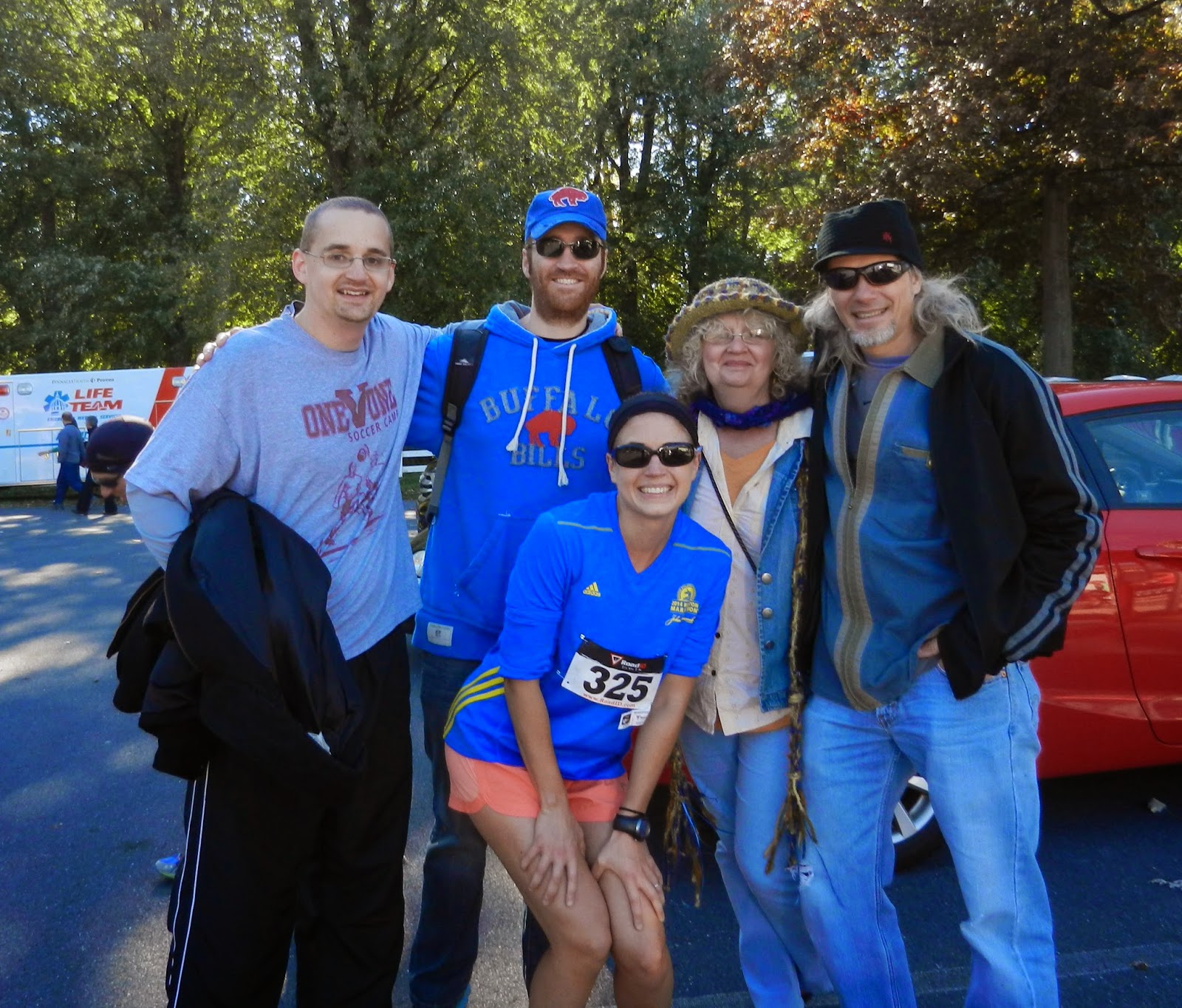 Me and my family! 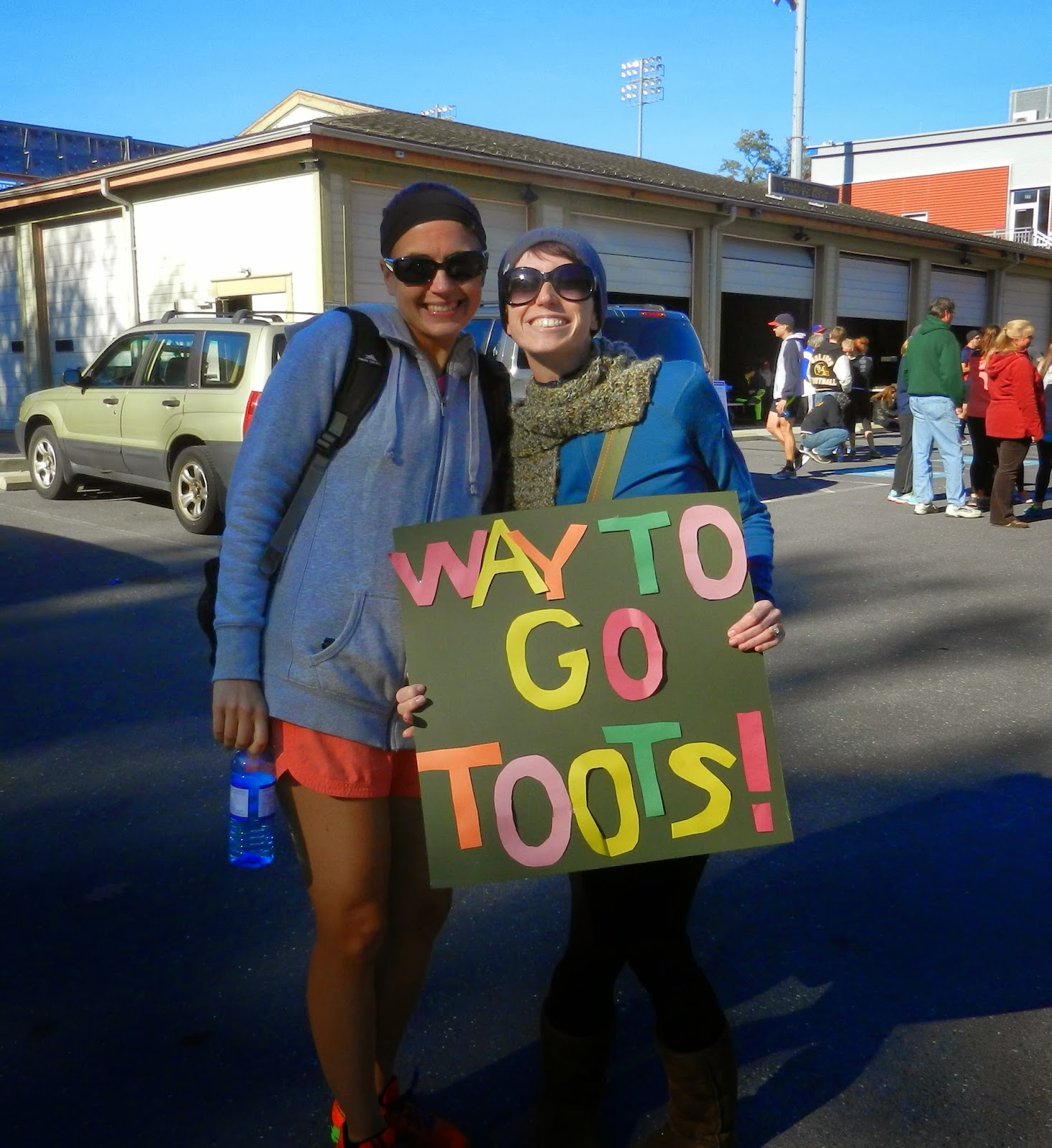 Bree came out to cheer me on! What a nice surprise! 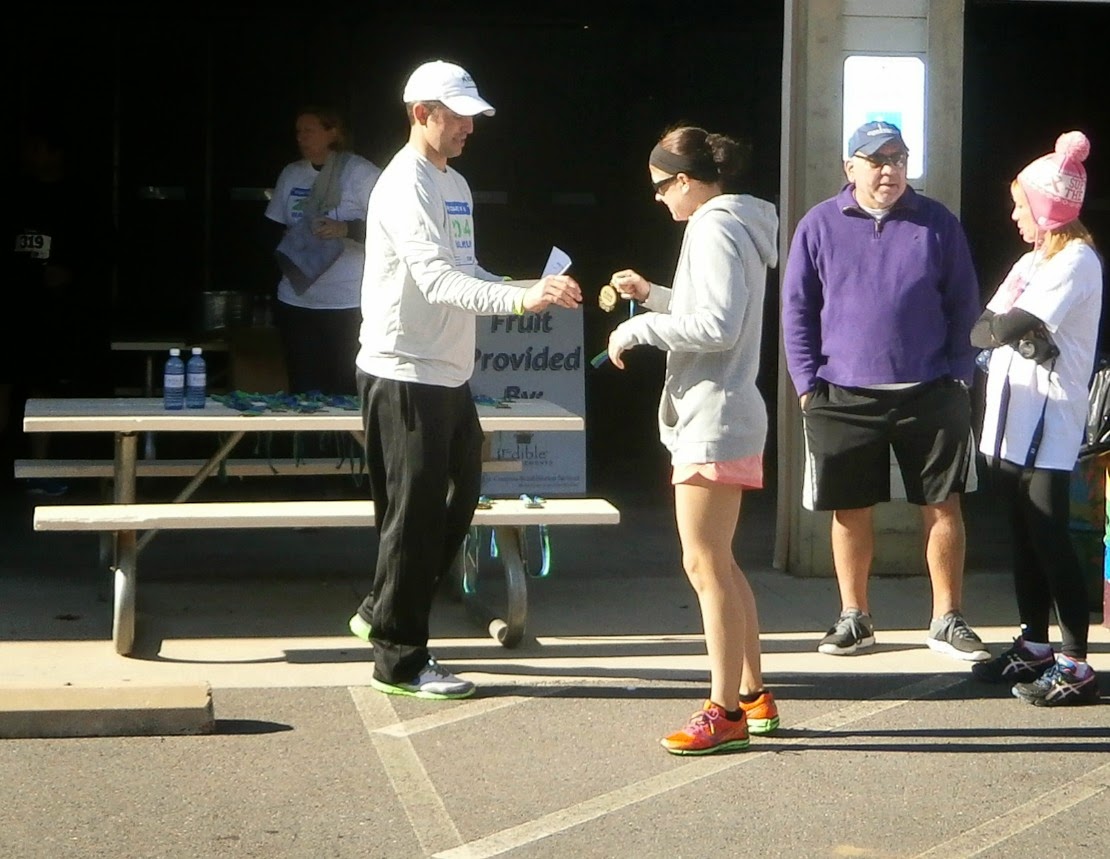 I got a medal! 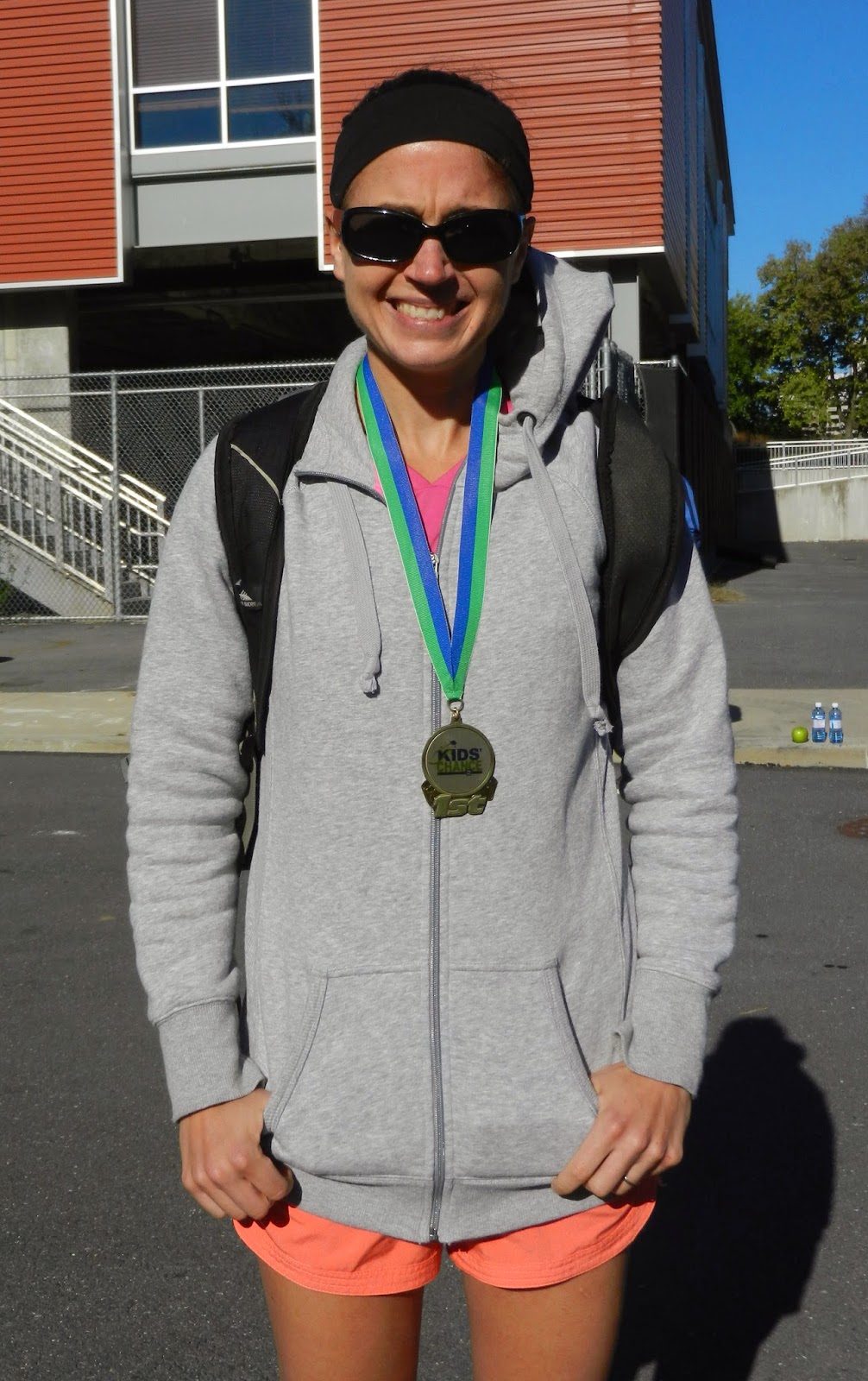 I am really proud of the effort I put into the race. Due to the wind, it was very tough. But that's just part of racing- dealing with the elements. And even though I am proud of my time, I realize I am proud of my 5.92 miler time, not my 10k time, because it wasn't a 10k. That is a bummer! Maybe my NEW race goal should be to run an actual 10k in the time it took me to run the 5.92 miler today!

I also learned something important- you can train your ass off but you can't plan for everything! I definitely was not planning on that wind and it made the race a lot tougher than I anticipated.

While I never set out to win anything (I had personal goals I set for myself), I am not going to pretend it wasn't cool to WIN A FREAKING RACE!!!!! That will probably never happen again and was just a FLUKE that it happened on this day. But it was cool. Also, I should note, that the Hershey Half Marathon was on the same day, which means A LOT of runners in the area were running that instead of this race. I know I'm not "The Fastest Person", I was just "The Fastest Person That Showed Up That Day".

Also, I wanted to thank Paul, my Mom and Dad, my little brother Tyler, and my friend Bree who came out to cheer for me! It's nice to have people who are your biggest fans and they made me feel really special for just doing something I love to do. But that is what friends and family are for, right?

1. It was very windy so I couldn't breathe.
Ouch.

4. I love my friends and family!
MUAH!

Did you ever run a race in which the distance was significantly inaccurate?
Posted by Meg Go Run at 5:30 AM