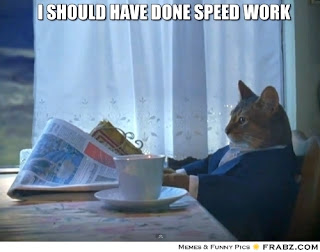 I have not done speed work since... before my 10k this past October. It is possible I did it once or twice since then, but I really doubt it... and I'm too lazy to go back and double check!

For some reason, on Monday morning, I decided it was MY DAY to do speed work! I called it "Sneaky Six o'clock Speed". (Sneaky because I didn't plan on it, I decided to do it on the fly... Six o'clock because I got it all done in the 6:00am hour.)

I didn't go to a track. That requires too much planning. And it is scary. I have a loop around my house that is .66 miles. The route is basically flat... there are parts with a little bit of an incline and a little bit of a downhill. But it's a circle, so it all evens out.

Here is what I did:

The goal for my "ons" wasn't to sprint as fast as I could. It was just to pick up the speed a little bit. But as my workout went on, it was easier to go a little faster because I was getting warmed up.

It equaled out to 4 miles @ 7:54 pace. My "ons" were anywhere between 6 minute miles and 7:30 minute miles. My "offs" were in the high 8s. I wasn't obsessed with my pace, I just made it a point to glance down once in awhile.

It was a short little workout but it got my heart pumping and ready for my first day back at work! My body felt strong the whole workout. Even though it was really early, it was quite hot and I was super slimy after my run... It was the special kind of slimy... "speedy slimy"!

I would love to do some more purposeful speed work once a week. Hopefully I will remember this great feeling and it will motivate me to do it again!

Tell me the last time you had a great speed workout, or a workout that made you feel very accomplished!

Are you a morning runner? Running first thing is my SHIT!
Posted by Meg Go Run at 5:30 AM