Reading about murders is affecting my running! 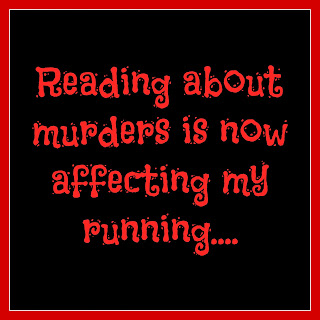 Over the past couple years, I have had only a few "favorite" murders. Jodi Arias and JonBenet are at the top of the list. When I say "favorite", I mean I could either read about them every single day without getting bored or watch coverage of them over and over again without getting bored. For instance, I read about the JonBenet case every night before I go to bed and I watched the Jodi Arias trial twice, plus highlights from it many times.

I have never been scared while reading or listening to the trial of Jodi Arias. Maybe that is because I know I will never have a psychotic ex girlfriend. There have been times when the JonBenet case has creeped me out. One time, I was listening to a podcast about JonBenet. I was on a run in the dark early morning hours and I got scared! I also have gotten scared reading about it on my phone while laying in bed at night. Even though I will never be a 6 year old beauty queen murdered in my own home, the JonBenet case has given me the creeps! 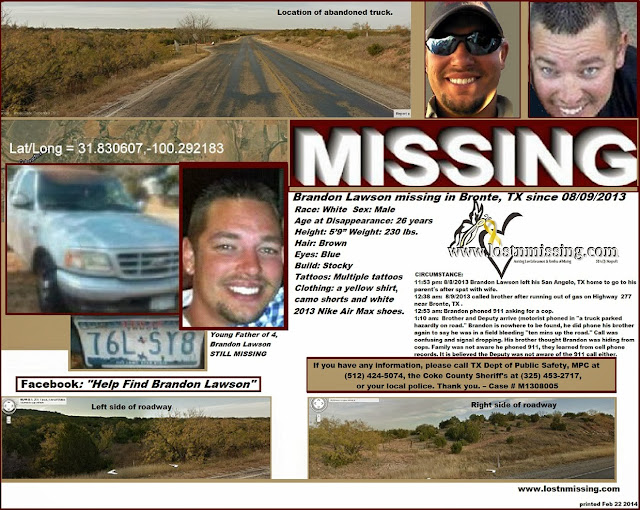 Here is the short story:


In 2013, Brandon Lawson was a 26 year old father of four living in Texas. He lived with his girlfriend of many years. This girlfriend was also the mother of three of his children, so it was a serious relationship. One night, they had an argument and Brandon decided he was going to drive two hours to his dad's house. Since it was about midnight, his dad told him it was best to stay put, but Brandon insisted on going anyway. He hopped in his truck and hit the road.

Around 12:30am, Brandon called his brother, Kyle, to let him know he ran out of gas on a long, desolate stretch of highway.

Kyle said he'd bring him gas. When Kyle showed up to Brandon's truck, Brandon was nowhere to be found but there was a cop at his truck. Apparently, a trucker called the police to let them know that there was a truck parked haphazardly on the side of the road and it may pose a danger. Kyle told the cop Brandon must have stepped away, but he was there to bring him gas.

Now, there was actually a warrant out for Brandon's arrest due to a very old drug charge. It was the kind of drug charge that would warrant a fine, not jail time, and Brandon and his girlfriend were actually in the process of saving up money to pay the fine and take care of it. So when Brandon wasn't at the truck, Kyle assumed that when Brandon saw the cop approaching his truck, that he went and hid in nearby brush so he wouldn't get arrested.

Well it turns out the cop never even ran Brandon's license plates and when Kyle showed up with gas, the cop left. At this point, Kyle called Brandon to figure out where he was. Brandon answered and sounded out of breath and like he was running through brush or a field or something. He said he was about 10 minutes up the road and that he was bleeding. He told Kyle to hurry up and get there.

Kyle drove up and down the road but his brother Brandon was nowhere to be found... and Brandon has NEVER been found!

Now that isn't the creepiest part. Are you ready to be freaked out?????

After Brandon's disappearance, his girlfriend was looking through his cell phone records and realized BRANDON CALLED 911 THAT NIGHT!

Wait until you hear the 911 call. It is creepy. It's hard to understand what he is saying at some parts. Here's the 911 call...


Here's what most people agree Brandon is saying...

Now, Brandon's family insists he never would have run off and faked his death. He never would have purposefully disappeared and left his children. He was a loving father and a very hard worker. Some weeks he worked 80-90 hours in the oil fields. It would be unlike him to just leave... 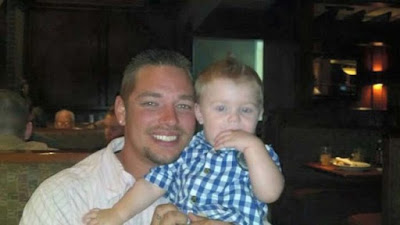 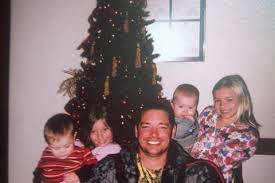 So where is Brandon? No one knows.

Here's a Google Map view of exactly where Brandon's truck was found. As you can see... there's nothing around!

Here's a timeline of what happened that night. It's very interesting because when Kyle first arrived at the truck and called Brandon (when Brandon told Kyle he was bleeding) Brandon had ALREADY called 911! So Brandon was alive and answering his phone for at least 30 minutes after he called 911.

10:45-11:00 pm: Brandon and his girlfriend, Ladessa, have an argument.
11:54 pm: Brandon leaves his house with his keys, wallet, and cell phone. He had phoned his father in Fort Worth to let him know he was driving there.
8-9-13
12:30 am: Brandon calls his brother Kyle and tells him he ran out of gas. Kyle and his girlfriend, Audrey, call Ladessa to let her know that Brandon ran out of gas. Kyle and Audrey pick up a gas can from Brandon's house and then drive out to give it to him.
12:34 am, 12:36 am, and 12:48 am: Ladessa misses three from Brandon.  He does not leave any voice mails. Ladessa says her phone was charging in her car, that is why she did not hear the calls.
12:50 am: Brandon calls 911 and leaves a confusing call. He says he ran out of gas and that he needs the cops. He sounds out of breath and it's hard to understand what he's saying.
12:58 am: The Coke County Sheriff’s office gets a call from a trucker that a vehicle is parked on the side of Highway 277 and may pose a risk to oncoming traffic.
1:18 am: Kyle and Audrey call Brandon to find out where is truck is. Brandon sounded like he was running through brush, and Kyle heard Brandon say that he was “10 minutes up the road” and to “just hurry up and get here.”  At some point, Audrey also talks to him on the phone and Brandon tells her he's bleeding. The call either drops or Brandon hangs up.
Kyle and Audrey are at Brandon’s truck, which is abandoned and undamaged. A police officer arrives from the other direction at the same time. The police officer asks if Kyle was the one who made the call about the vehicle.  Kyle says the truck is owned by his brother who must have stepped away.  Shortly after this, the officer leaves the scene, and proceeds to drive around looking for Brandon (who he assumes is walking).
It is important to note that the officer does not mention Brandon's 911 call and Kyle does not mention that he talked to Brandon and that he was bleeding. Kyle and the officer came from different directions and neither saw anything suspicious.
Kyle and Audrey try texting Brandon since the cell service was bad. They tell him a cop was at his truck but that he is gone now. They thought maybe Brandon had been hiding from the cop due to the warrant out for his arrest.
1:30-4:30 am:  Kyle drives up and down the highway trying to find Brandon.
3:30 am: Kyle says Brandon’s cell phone stops ringing, so it was either turned off or dead.
4:30 am: Kyle calls Ladessa and says he’s found Brandon’s truck, but he can't find Brandon.
5:00 am: Ladessa calls the police station regarding the abandoned truck and to see if they had any information.
7:00 am: Kyle puts in Brandon’s truck, in case he returns.
8:30 am: The Sheriff’s Department has Brandon’s truck towed.
If you want to listen to a podcast about the case which covers just about everything and really digs into the 911 call, I recommend part 1 and part 2 from True Crime Garage.

After listening to these podcasts, I started doing more research on the case using reddit and other blogs. I was laying in bed Friday night reading about Brandon Lawson's disappearance and I told him this case was freaking me out so much that I didn't want to go run trail by myself.

"YES I AM!" I told him. Then I made him listen to the 911 call and he agreed with me. It was reaaaaaaaaaaaaaaaaally freaky! I think this case has me too scared to run in the woods by myself...

Are there certain places you're afraid to run alone?
What true crime stories freak you out the most?
What do you think happened to Brandon?
Posted by Meg Go Run at 5:30 AM