One thing I love about going on vacation or visiting another city is the chance to run someplace new. Whenever I go to NYC, I make it a point to get up early and run in Central Park. That's exactly what I did on Thursday morning!

It seems like every time I run in Central Park it is dark out. That's because I can usually squeeze my runs in during the 6 o'clock hour! Don't worry, it's actually very safe. I stay on the main loop around the park and there are always other runners nearby (sometimes it's actually crowded!) and of course packs of cyclists whizzing by.

This run almost didn't happen. The real feel for 6am was supposed to be 1 degee! ONE DEGREE!!!??? I am hardcore but I don't think I'm THAT hardcore!

Still, I laid out my running clothes the night before.... 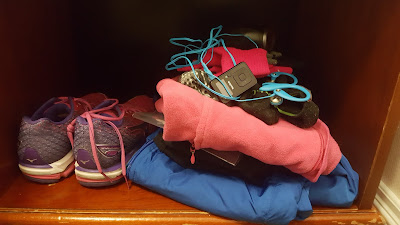 But then I realized running in 1 degrees on 2 hours of sleep was probably not a good idea. So I changed my alarm and told Paul I was sleeping in!

I headed out at 5:50am. Our hotel on West 87th street was four blocks from the park. It's sort of a ritzy neighborhood so I felt safe. But I made sure to be very aware of my surroundings and I didn't let my guard down or turn on my headphones until I got to Central Park West and there were more cars and people around. Oh, and I had my phone right in my hand!

Unfortunately, my normal path into the park was blocked by construction, so I ran up a block and got on the 85th Street Traverse, which is a road that cuts through Central Park. There was a sidewalk to run on but there weren't any runners. My hope was to find a way to get on West Drive but there was no way to get off the Traverse. It was dark and once in awhile a car would drive by. I was freaked out until I passed a building that said "New York City Police Department". Bwahaha! I guess I was safe.

I ended up having to run to the other side of the park and got on East Drive, which is part of my normal run. I did something different and ran counter clockwise. This is going to sound weird, but when I don't get a lot of sleep, I tend to run faster. My first couple miles were sub 8s! That's a lot faster than I have been running lately. After a couple miles it started to hit me and a slowed down. But for awhile, it felt good to cruise!

The northern part of the park was dark and there weren't too many people around. I still felt safe because even though there were times I couldn't see anyone, it wouldn't be long before another runner came around the bend or I'd hear the whooshing sound of a pack of cyclists approaching.

Once I was on the West Side heading south, there were people everywhere. Maybe this is a busier section of the park or maybe there were more people because it was a little later in the morning.

As I run through the park, I always enjoy looking up through the trees at the skyscrapers and the city lights. I imagined that if I lived in the city, I'd be running here every morning. Where else is there to run?

One thing I'm always nervous about in Central Park is what if I have to go to the bathroom? I don't know where the bathrooms are and I wouldn't feel comfortable going into the woods/trees. I don't want to get murdered or arrested.

I ended up stopping after 7.5 miles (about an hour of running). With just 2 hours of sleep, I had enough!

When I got back to the hotel room, I was able to shower and get dressed before Paul's alarm went off. Once he was awake I told him I had a good run and it wasn't even cold. In fact, there were people in shorts.

"I didn't know you went for a run, I thought you weren't running this morning," he said.

"I know, but I woke up right at 5:40 and I was wide awake. I checked the weather and it said the real feel was 18 degrees so I went out. I woke you up and told you I was leaving and that I had my phone with me!"

Dang, it's a good thing no one murdered me or I would have been laying in the park and Paul wouldn't know where I was and we would end up missing our train! 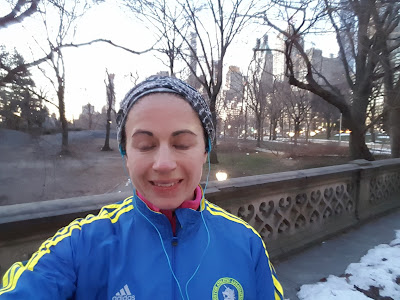 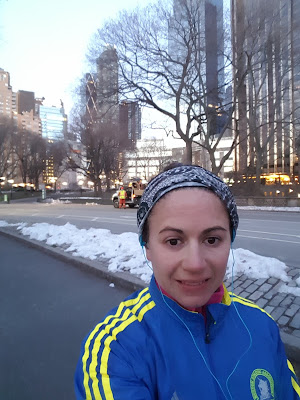 Questions for NYC runners:
Am I right to feel safe running in Central Park?
Is there anywhere else runners can go in NYC?
Give me some running tips for my next visit!
Posted by Meg Go Run at 5:16 AM