Guys, yesterday I had the CRUDDIEST run. It was just the worst.

Friday was not a great day for reasons I can't get into. (Sorry to be vague, but in this instance I have to be.) I stayed up really late (12:30ish) but planned to get up at a reasonable time- like 7-8 as I am trying to clean up my sleeping habits. My body had other plans.

I woke up at 5:30 with EXCRUTIATING pain in my 4th toe on my right foot. It hurt SO FREAKING BAD. It was pulsating. It felt like I was being continuously stabbed in the toe. Even though I was so tired, I could not fall back asleep due to the horrible pain.

At 7:00, I got up to get an ice pack. I couldn't put any weight on my foot as my toe hurt so bad. I hobbled back to bed and laid my foot on the ice pack. WOW!!! Sweet relief!!!! I fell asleep... for 17 minutes. When the ice pack wasn't cold anymore, the pain came back and it woke me up. Never fear, I'm a runner! I have lots of ice packs! I got another one out of the freezer and was able to sleep for 20 minutes. Then I woke up and got one more ice pack. I slept straight until 11:12. I was happy for the sleep but pissed that I couldn't stick to a sleep schedule like I wanted to.

I was wondering if I was going to be able to run that day or even within the next several days. Just four hours earlier, I could barely walk! Luckily, at this point, my toe didn't hurt as long as I didn't move it. It was more red than the others. Was it an ingrown toenail causing the pain!? I soaked it in salt water. I wasn't sure if that was going to do anything but it was worth a shot. 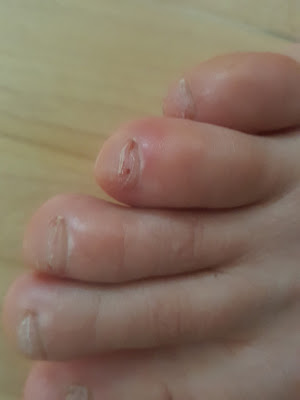 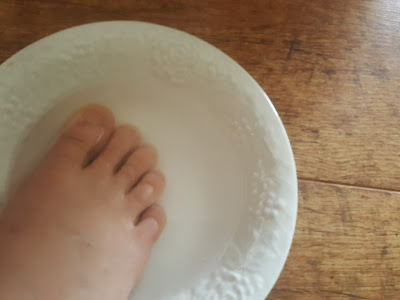 Around 1 o'clock squeezed my foot into my running shoe. I could feel pain but not a ton. I would definitely be able to run. Since the weather was beautiful, I wanted to drive somewhere so I could really soak in the fall beauty of Central PA.

I decided to park at Messiah College and run the back roads around the campus. This was a place I used to run at all the time with the running group I trained with for marathons. I figured I wouldn't need directions to find the parking lot as I drove there a million times. Surely I would remember how to get there. WRONG!!! There was construction and some roads were closed, so I had no clue where I was! I drove around aimlessly for awhile, worried because my gas tank was on empty. But then I remembered I had a smartphone, so I went to Google Maps and it directed me to the stadium lot I always parked in...

Except there was a rent-a-cop dude who stopped me and made me roll down my window.

"What are you here for?" he asked.

Ummmm.... okay??? I figured I deserved more of an answer than "Nope." So I just looked at him.

"No one can park here until the ceremonies are over," he told me. It looked like something was going on in the stadium, but there were plenty of open parking spaces. I didn't understand why I couldn't park there.

"Okay, is there somewhere else I can park?" I asked. He told me to turn around and find a spot outside one of the buildings.

So off I went to search for another spot. Boy was this going to mess up the route I had planned out, especially because I totally planned on blowing up the bathroom at the stadium.

I finally found a spot and off I went on my run. I took the long way around the stadium lot so I didn't have to run by the rent-a-cop. By the time I made it to the stadium bathrooms, everyone was leaving. Seriously!? Just 10 minutes ago I had tried to park and wasn't allowed to until the ceremony was over even though there were plenty of parking spots available! Oh well, I was going to be running a little longer than I originally planned, it seemed. (My original thought was 11 miles.)

The scenery was beautiful, but my body felt heavy. I did not feel good at all. The whole entire thing was hilly, and I am not used to that type of terrain at all. I probably could have walked up some of the hills faster than I ran up them. I have officially found a weak spot in my running...

Before I even got to mile four, I was feeling absolutely horrible. I felt like I ran 8 miles, not 3.71. I had already passed two dead deer on the side of the road and about 10 Trump signs. DANG IT!!! The whole point of this run was to relax, not think about the election and other horrible life-y things, and just have a good time. I was not having a good time AT ALL.

I turned to Snap Chat and messaged my gal friends... Ali, Kristina, and Karen are wonderful women I can whine to. I felt a little bit better after I snapped them, and off I went to run some more.

As the run went on, I started to feel better. I never felt great, but my Snap Chat stop was definitely the low point. There were no more dead deer but there were literally probably 15 more Trump signs. That's what I get for running in South Central PA... 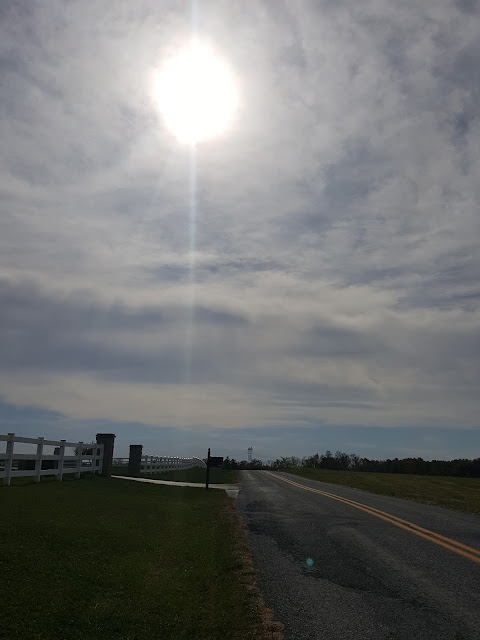 For the entire run, I listened to my favorite podcast- Rob Has A Podcast. I tried to zone out to nerdy Survivor talk. It was hard to believe that just three days ago, I MET ROB!!!!! I promise I will tell you about that fun experience on Tuesday!

Due to having to park somewhere else, I was approaching 13 miles. I did a couple loops around the parking lot to make it 13.1. I really freaking slow hilly half marathon is what I accomplished. 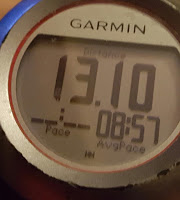 I went home, stretched, and decided to reward myself with a huge, fatty salad that I made at the grocery store. I also picked up some hydrogen peroxide that Karen swore would clear up my foot faster. 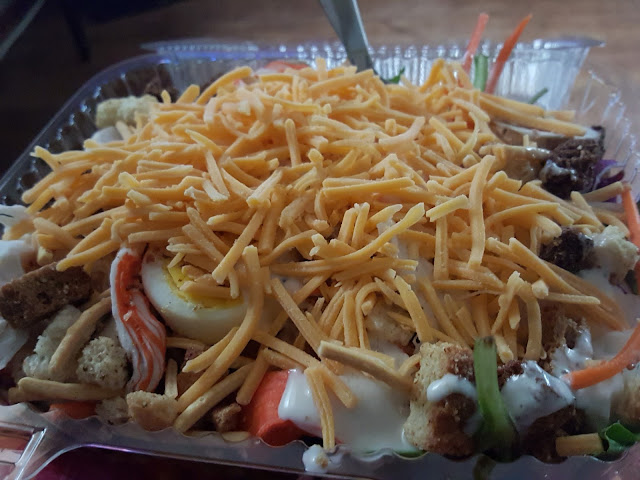 And now I'm writing this post for you as I sip sangria and listen to Jelly lick himself. 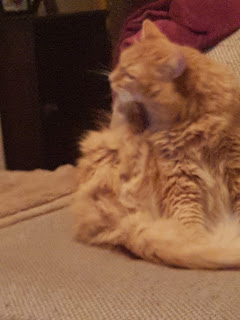 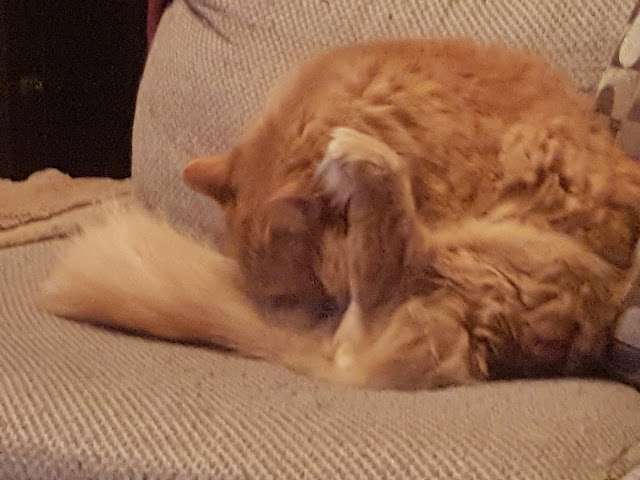 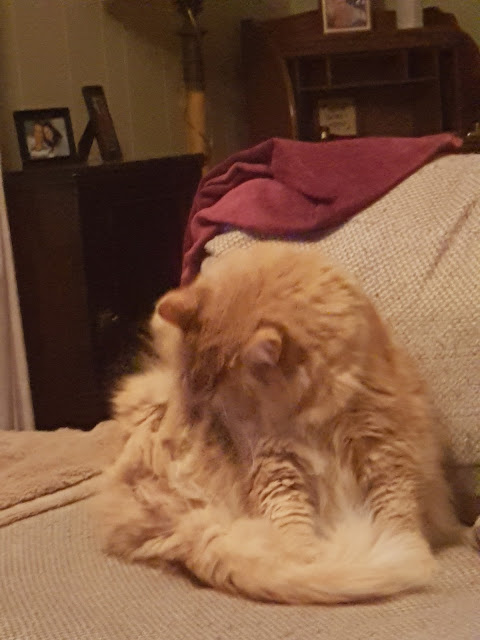 When was the last time you had a really cruddy run?
Are you strong on hills?
Posted by Meg Go Run at 5:30 AM