Taking the kitties to the vet.

Hey all! Thanks for your sound advice yesterday. I did NOT run! Woot! The pain is non existent now, even if I try really hard to flex my muscle and make it hurt. I may run today, or I may hold off another day. I don't know! But thanks for all your thoughts and kind words of advice!!!

NOW LET'S TALK ABOUT MY BABIES.

On Friday afternoon, we took Christmas and Jelly to the vet. They were due for their annual checkup as well as a couple vaccinations. Ideally we like to take them one at a time, but because you get a bit of a discount for doing both on the same visit, we do that.

Paul and I don't fight a lot, but there are certain situations that always cause us to argue. One such situation is when we try to get the cats in their carriers to take them to the vet. But this time, I was smart. It only took us 8+ years of marriage, but I finally realized that I should sit in the car and leave all the kitty rounding up to Paul. So that's what I did. He successfully got them in their carrying cases and off we went to the vet's office without an argument.

Our kitties cry in the car. You'd think they would be up for adventure- especially Christmas. But that is not the case. Luckily, it takes less than ten minutes to get to the vet's office, so they aren't stuck in the car for long.

Once we got in the exam room, they did not want to get out of their carriers. Jelly went first, and we literally had to pour him out of his case. He was a really good boy and did not growl or hiss at the vet. He took the thermometer up his butt like a man. Jelly got a clean bill of health, except for the tarter on his teeth. Jelly won't let me brush his teeth so I don't think there is much I can do about that except keep feeding him his dental treats.

When Jelly was done, he got into Chrissy's carrying case with him. Christmas hissed. Uh oh. I was scared they were going to fight. 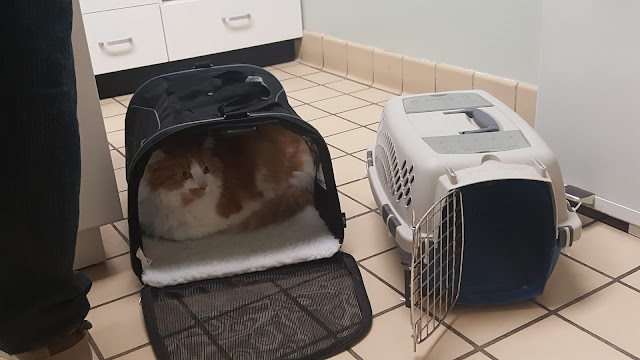 Can you picture Jelly squeezed in there with Chrissy?

Chrissy is normally horrible at the vet. He even has notes in his chart that he can be aggressive. But today, he was absolutely fine! He didn't like the vet messing with his lower half, but our vet was really good and allowed Chrissy to calm down before venturing to his nether regions. All in all, Chrissy was a good boy and I am proud of him. I can't imagine how scary it is for them to be outside their comfort zone! 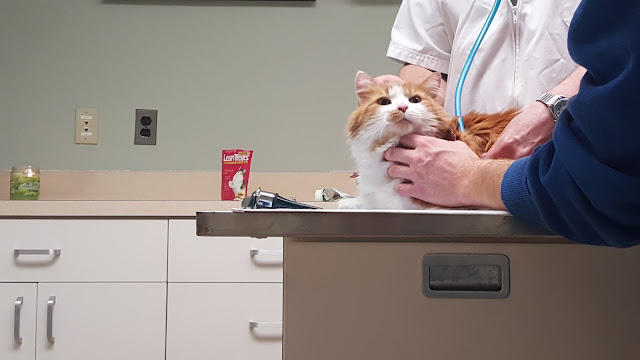 The vet kept gushing about how big and beautiful our cats are. He said their coat was so thick and healthy. He marveled at Chrissy's clean teeth. (He got them cleaned about two years ago.) We were beaming parents!

I love my kitties so much. I know you all know this, but I thought I'd tell you again! 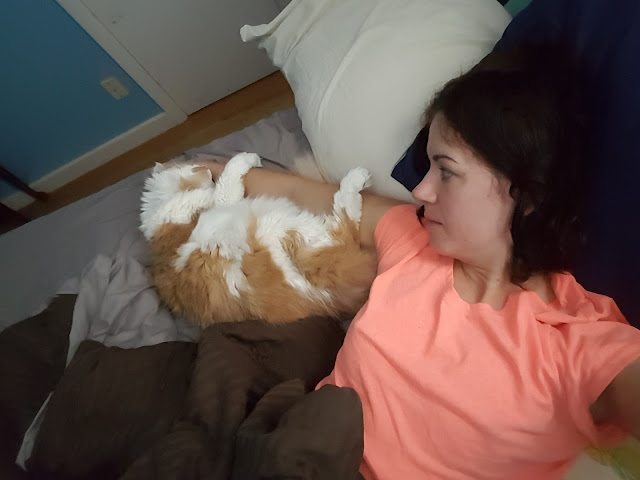 How do you fur babies react to the vet?
Or how do your actual children react to the doctor?
Posted by Meg Go Run at 5:30 AM