The Day I Qualified For Boston

Today, I am running the Boston Marathon- a race a qualified for over a year ago. I thought it was time to tell my tale of the day I qualified. Sit back, relax, and enjoy! 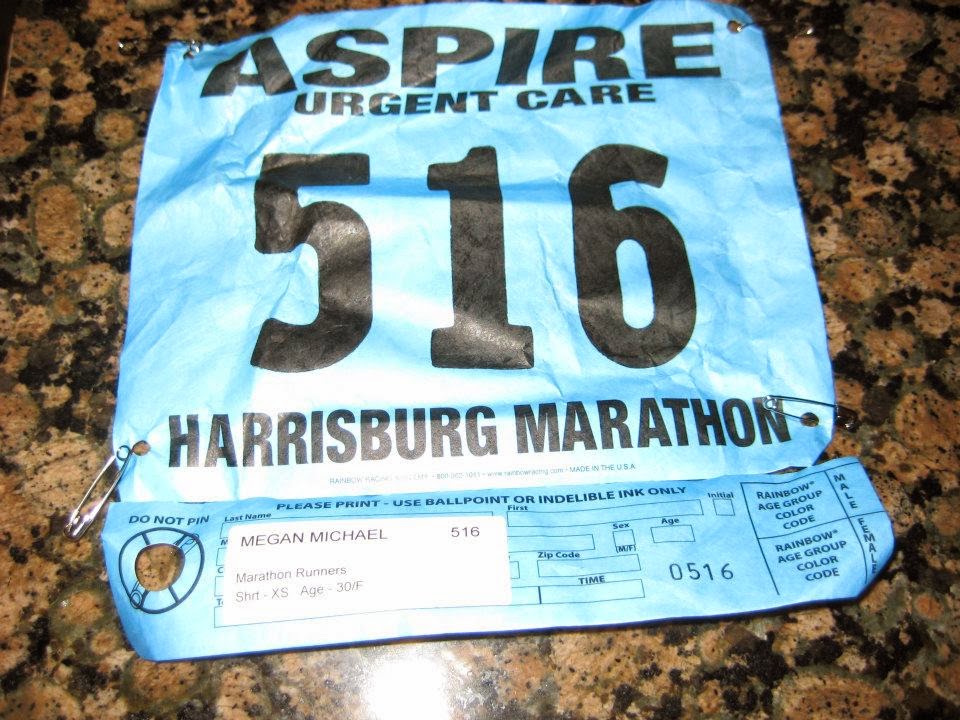 I qualified for Boston at the Harrisburg Marathon way back in November, 2012. I didn’t even know I was going to run the race until about a month beforehand.  I made the decision after I PR’ed running a half marathon around my neighborhood. Not an actual race- just a run I did one beautiful Sunday morning. I realized if I could PR in the half, I could probably PR in the marathon. Harrisburg was coming up, so I registered.

At that point I was doing long runs each weekend. I would alternate between 9 miles one weekend and 15 miles another weekend. I had a different route for each and they were extremely hilly, yet I kept improving my pace- sub 8 minute miles. I knew this was my time, and since I was in shape to PR, I should sign up for the race and give it a go!

Three weeks before the race, I did my standard 21 mile run.I ran most of the marathon course, wore the same clothes I planned to wear, the same shoes, my hydration pack… it was a true racing dress rehearsal. I was overjoyed when I finished my run ON PACE. I knew if I could just keep up that pace for another 40 minutes or so, I would hit my target.

But we all know there are many other variables involved. We can be as ready as can be but on race day the weather could be crappy, we could be sick, injured… any number of things. I was not guaranteed a PR, I was still going to have to work for it.

Harrisburg was my first marathon and I vowed never to run it again unless I wanted to PR. I’ve run the route so many times that it just wouldn’t be fun to run the marathon for “fun”. But it would be a GREAT course for me to PR on for several reasons:

1.   It is flat, except for some rolling hills miles 18-20.
2.   The starting line is ten minutes from my house- no need to deal with travel!
3.   I knew exactly what to expect from the course since I trained on it.

Before I tell you about the race itself, these were my goals... in order from the "easiest" to achieve to the more lofty, pie-in-the-sky goal...

Let’s cut to the morning of the race. It was gorgeous weather. A little cool at first, but I relaxed in the car until the start of the race. About a half hour beforehand, I ate a peanut butter and jelly sandwich. I knew I needed some FUEL because I was not going to eat during the race. There were actually a lot more runners registered than usual because many of the people who had planned to run the NYC Marathon ran Harrisburg instead. (This was the year it was canceled because of the hurricane.) I remember talking to some NYC natives as we waited at the starting line. They were so thankful to have another race to run so their training didn’t go to waste. Harrisburg welcomed them with open arms!

Oh, one other thing I forgot to mention. Remember how I told you that you can be as ready as can be but variables beyond your control can affect your race? Well, I got my period THE MORNING OF THE MARATHON. I couldn’t believe it. When I was younger, I had zero uncomfortable side effects when I got my period but within the last couple years, the first day of my period has been very uncomfortable- sore back, sore thighs, gas, constant trips to the bathroom (#1 & #2), cramps… all on the first day. NOT ideal for racing a marathon. I was worried but what could I do? Hope for the best!

Other than doing speed work, weight training, and running only quality miles (no junk miles), one of the most important things I did to prepare to run a PR is REST. I rested for a full three days before the race. It worked. The first 3 miles of the race I had to FORCE myself to slow down. Running was just so effortless… I felt like I was floating. But I knew I was going way too fast. I did successfully make myself slow down. It was really nice to run on legs that were so fresh.

I wore my hydration pack so I wouldn’t have to stop at water stations. I know most people don’t wear hydration packs during marathons, but I train with mine all the time so I’m really used to it. I saw my dad within the first few miles. He works in downtown Harrisburg and walked over to see me during one of his breaks. It was great motivation! 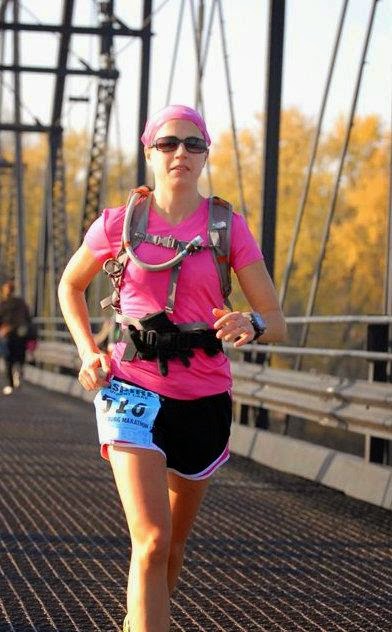 For most of the race, I just chugged along, staying a little ahead of pace. I didn’t let myself get too far ahead because I knew that could have horrible consequences toward the end. I saw Paul and his mom several times along the course. Harrisburg is a spectator friendly marathon because it’s really easy to see runners many times throughout the race. 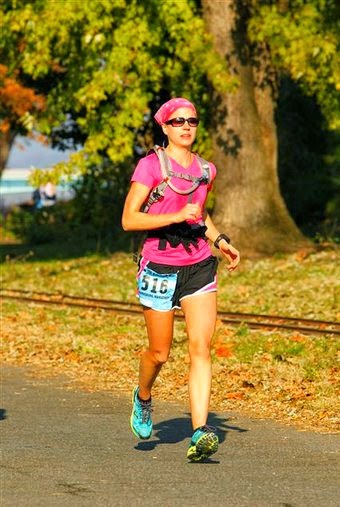 Luckily, I wasn’t experiencing my normal “first day of my period symptoms”. I stopped to pee once (behind a port o john- I didn’t wait in line- no time for that!!) but that was it. I couldn’t believe I wasn’t feeling crampy or anything. Maybe my body was just in survival mode or something?

My plan was to ditch my hydration pack at Mile 20. This would be right after coming out of the Wildwood Hills. I thought it would make me feel “lighter” for the last 6 miles of the race. I also planned to start listening to tunes- just for some extra energy. So at Mile 20, I handed my water off to Paul and his mom. “You got this!” they told me. “I’M DOING IT!” I declared. 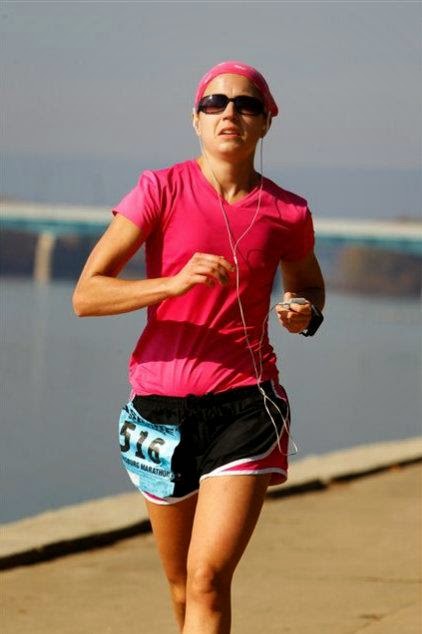 During the last 6 miles, I listened to music and just forced myself to keep charging along at my consistent pace. Things started to hurt, but I kept telling myself, “38 more minutes… 30 more minutes… 24 more minutes… It will be over soon and the pain will stop soon." My calves were twitching, which sort of freaked my out but I tried to ignore it. I didn’t hit the wall but I was definitely pushing my body to the brink. There was no doubt about that. 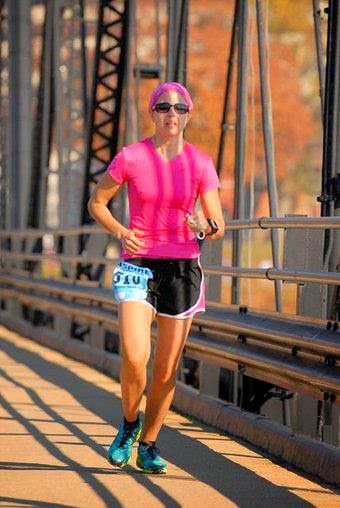 The marathon ends on City Island, which is in the Susquehanna River. As the bridge approached, I couldn’t believe I was going to reach my pie in the sky goal. I saw my dad again with less than a quarter mile to go. Somehow, he was able to get another break from work and catch me right at the end of the race as I was about to cross the bridge. 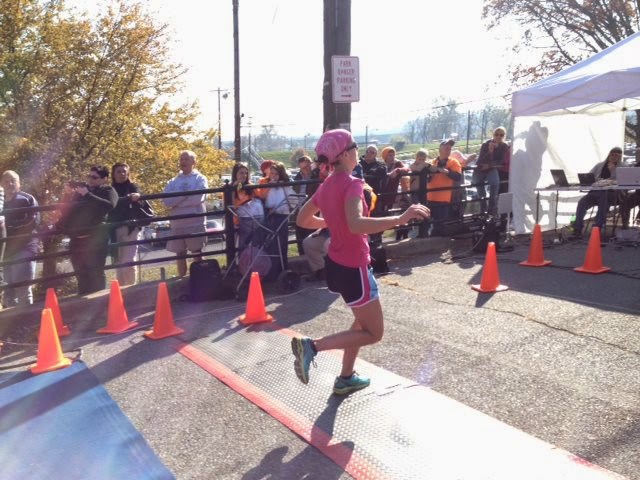 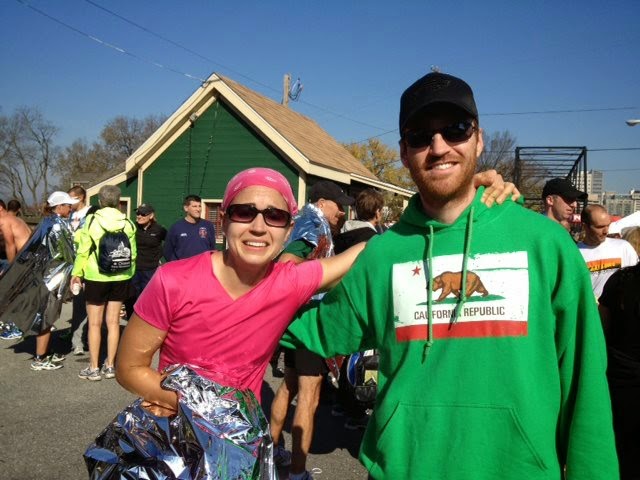 Remember how during the last few miles, I kept telling myself the pain would stop as soon as I stopped running? FALSE. It was when I stopped running that EVERYTHING started screaming at me. I wasn't injured but boy were my muscle sore and my joints creaky. It was then I realized what I had put my body through. Racing a marathon and pushing my body as hard as it could go is not something I can do multiple times a year. There are seasons in running careers. That day was a PR for me, but there would be much easier runs in my future. (And knee surgery 14 months later haha.) 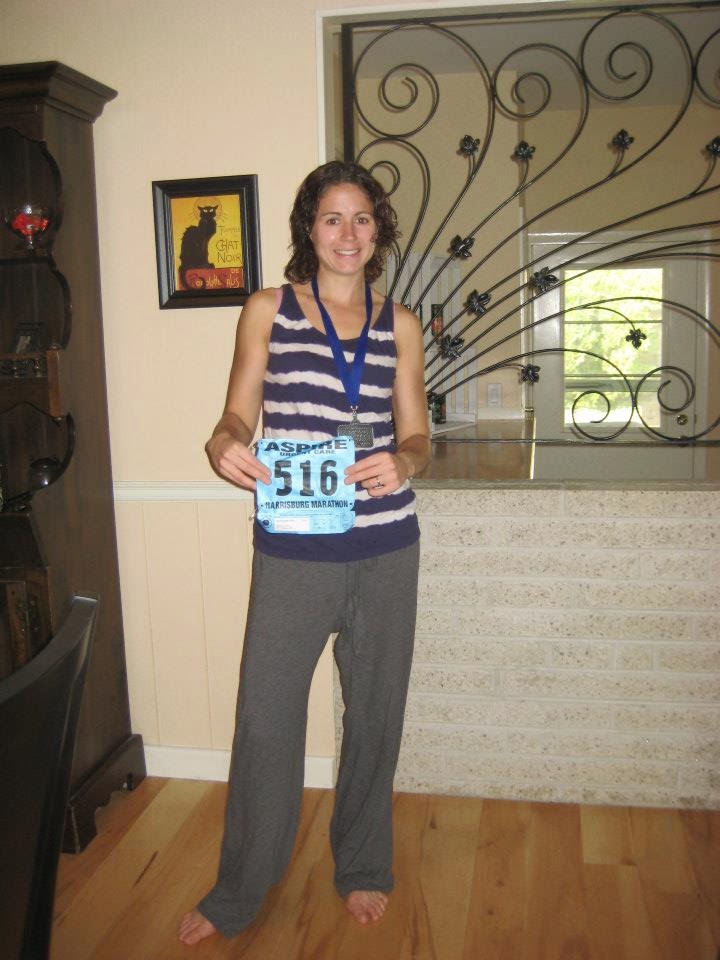 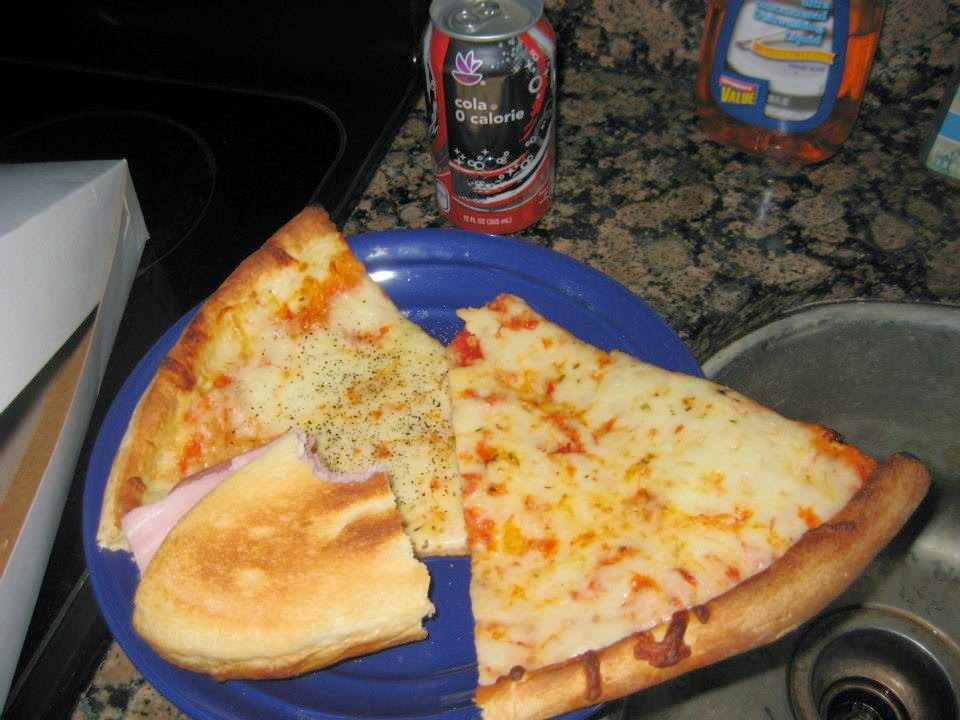 I was a bottomless put after the race. On the way home, I chugged an orange juice. Then I chugged an apple juice as I lounged on he couch at home. Lunch was an italian sub and two huge slices of pizza (pictured). Chocolate chip cookies were my dessert. Later that night, I went to an improv show and had a huge mountain of nachos with every topping known to man. Oh, it was glorious.

I just thought I would tell you a little bit about the race that actually got me to where I am today... Boston! I know I have been struggling with injury, surgery, recovery... I'm still struggling to get better. I am just so thankful what I am still able to run Boston, even though I am not 100%, nor am I anywhere near the shape I was in when I actually qualified. Part of me wonders if I even belong in Boston if I am not capable of running the pace that actually got me here in the first place. Obviously that is ridiculous, but my running ego still whispers that in my ear from time to time. Then I remind myself I earned it, and I have just as much right to be there as anyone. Oh, the things we say to ourselves and the standards we hold ourselves up to!