Since I had off work on Monday, I took myself on a little adventure. I checked out a new to me section of the Appalachian Trail in Hamburg, PA. This section of the trail was going to reward me with two rock outcroppings overlooking beautiful Pennsylvania farmland: Pulpit Rock and The Pinnacle.

The day felt like summer for two reasons. First, I had nothing to do and all day to do it. Second, the weather was warm and sunny. I pulled into the crowded parking area by the Hamburg Reservoir a little before noon, clipped on my hydration pack, and headed up the gravel road to the AT.

I wasn't sure how much of the trail I'd be able to run and how much I'd have to hike. I was hoping to be able to mostly run and that's what ended up happening.

It was easy to follow the white blazes for the AT up the mountain. I walked a couple steep sections, but for the most part I was able to chug along. As I approached Pulpit Rock, it got really rocky and I had to hike. I passed a young couple and they pointed out a porcupine hiding in a bush. (See, those are the things you miss when you are trail running as opposed to hiking and taking the time to smell the roses!) 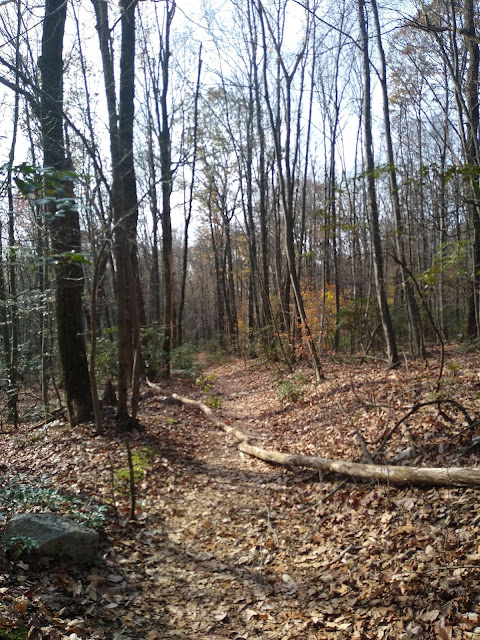 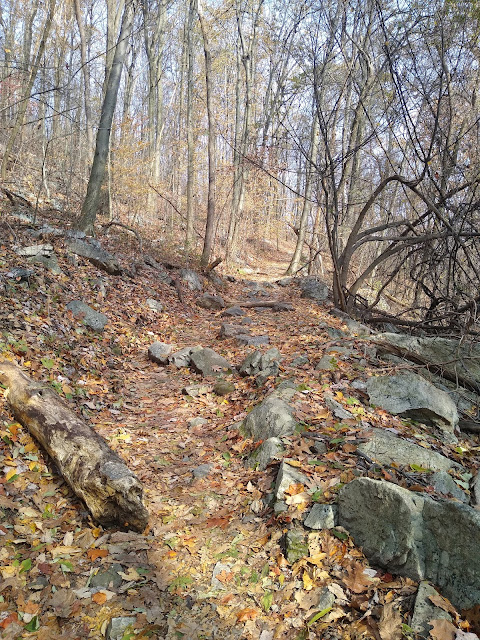 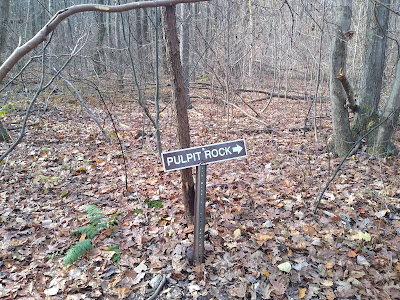 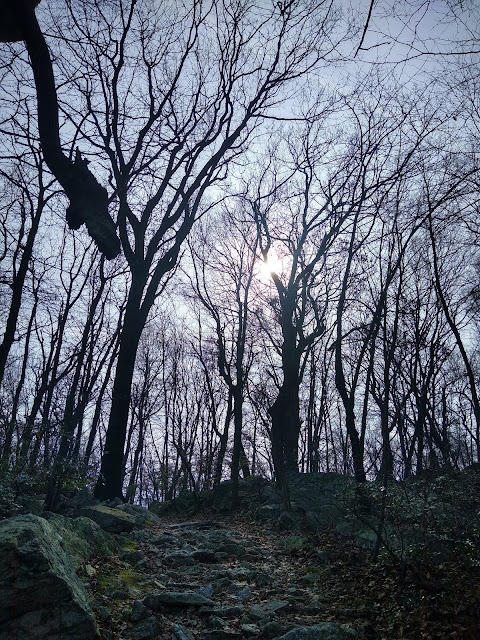 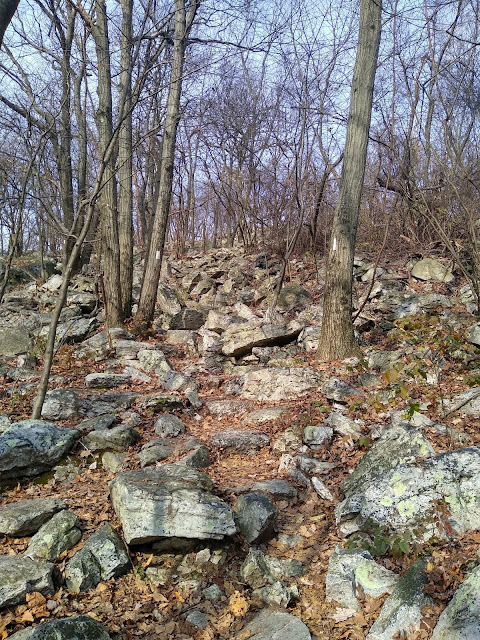 If it were summer I'd be so afraid of snakes on these rocks!

The view from Pulpit Rock was breathtaking! I know I always talk about how beautiful Colorado and Northern California are, but PA does not disappoint either! 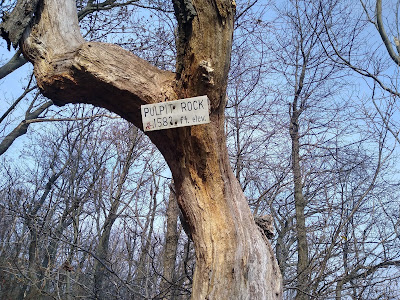 Not quite the elevation of Colorado... 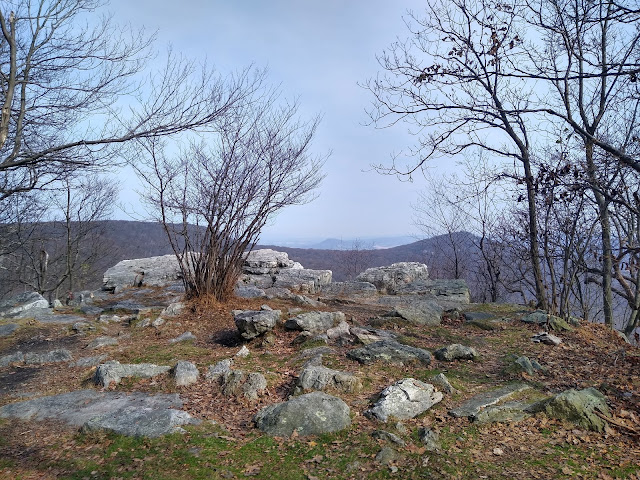 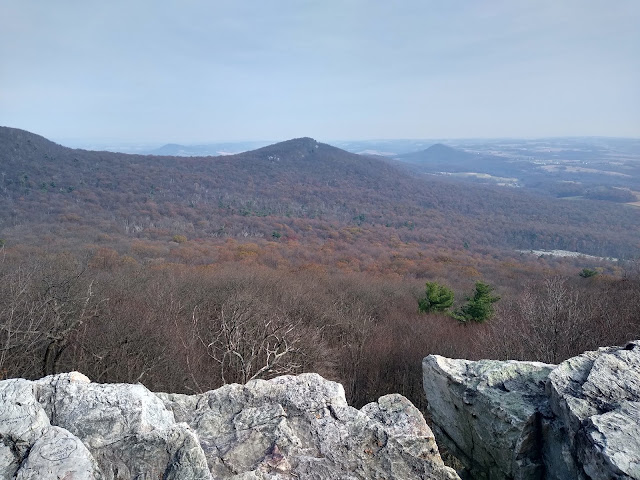 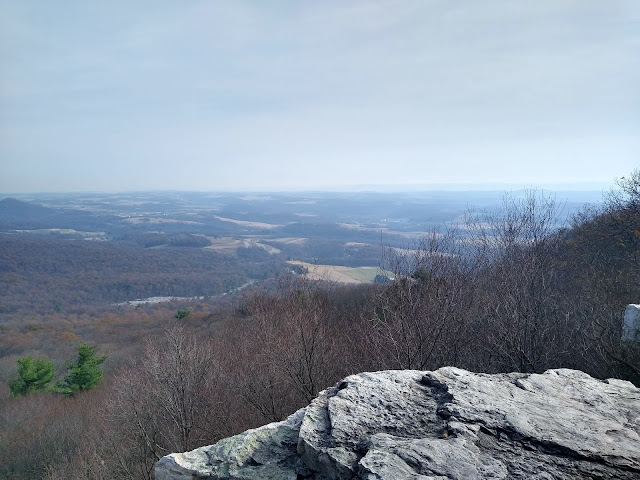 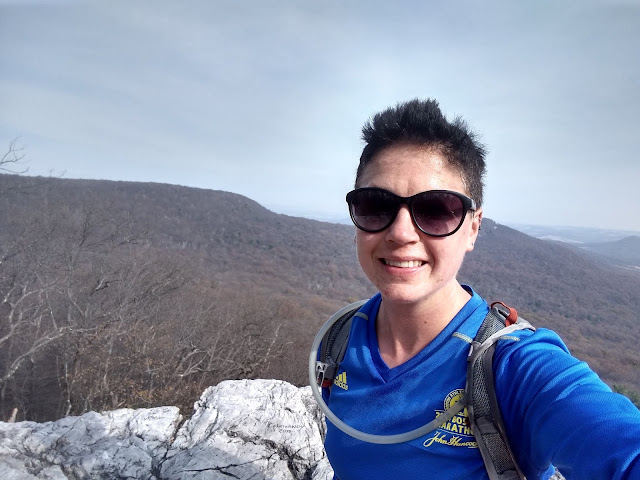 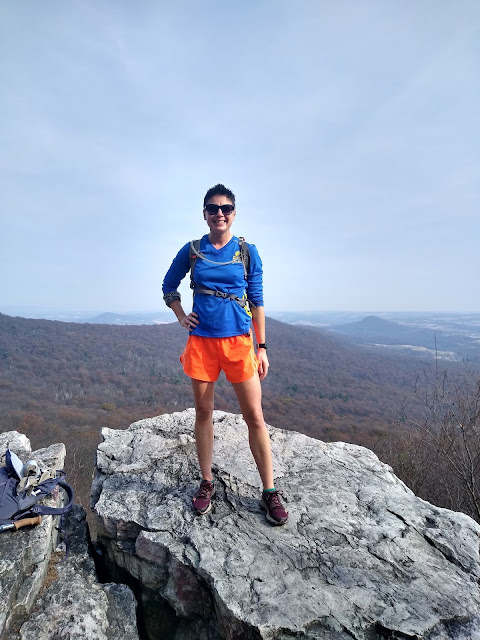 While enjoying the views, I started chatting with two other hikers. I took their picture overlooking the view and they took one of me. The women told me they were going to text the picture of them to their former colleagues. Turns out they are retired elementary school teachers. School was in session that day for their district, so they wanted to send them a little picture of what retirement looks like! (And they were probably trying to rub it in a little too!) We chatted for a bit about teaching and then I was on my way. I still had a lot of miles left to go!

I continued north on the AT along the ridge line. It got very rocky and I had to walk some sections so I wouldn't twist an ankle. There were also some areas with boulders and I got a little confused about which way to go. I never got lost, just had to look carefully for the next white blaze. After about two miles, I made it to the enormous rock cairn and knew The Pinnacle was close! 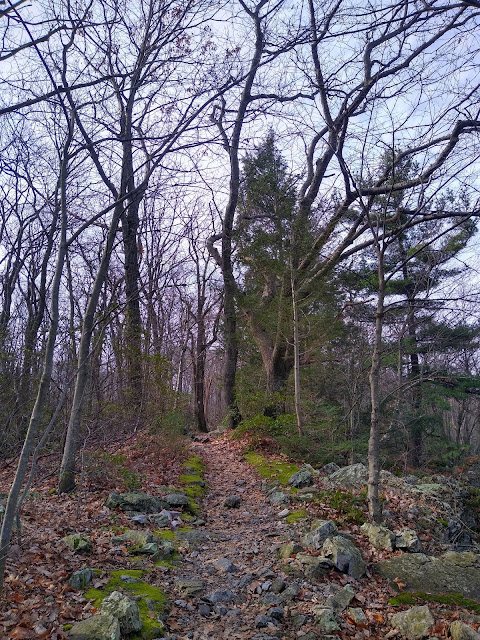 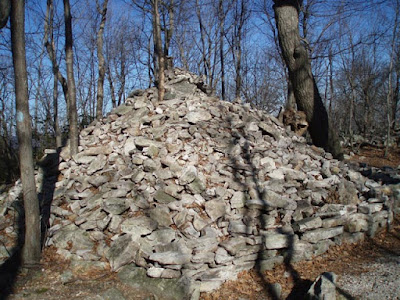 The Pulpit overlook was amazing but The Pinnacle was even better! It was just more vast and open! There was a rowdy group of hikers enjoying the view as well but luckily they left after a few minutes. I hate when people are loud at beautiful overlooks. I feel like one should respect nature and be quiet.

I found a spot on the rock outcropping and chilled out for a bit. I took a couple pictures, had some water, and just enjoyed the beautiful views and the beautiful weather. Whenever I discover new extraordinary places, I always think about the people I want to take there. I was making a mental note in my head of all the people I wanted to show this spectacular view. 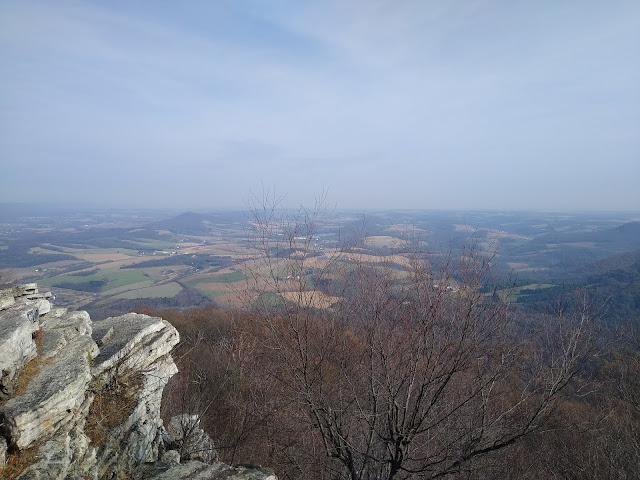 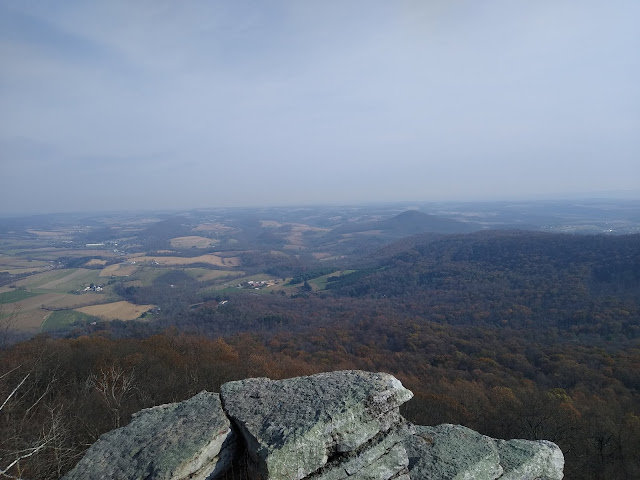 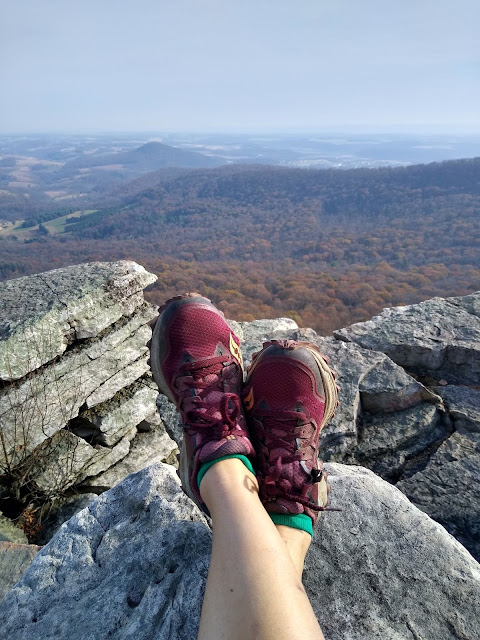 After enjoying the views, onward I went! I continued on the AT. The trail was wide and not rocky at all! After lots of climbing during the previous sections, this part was an enjoyable gradual downhill! The next couple miles were absolutely effortless! 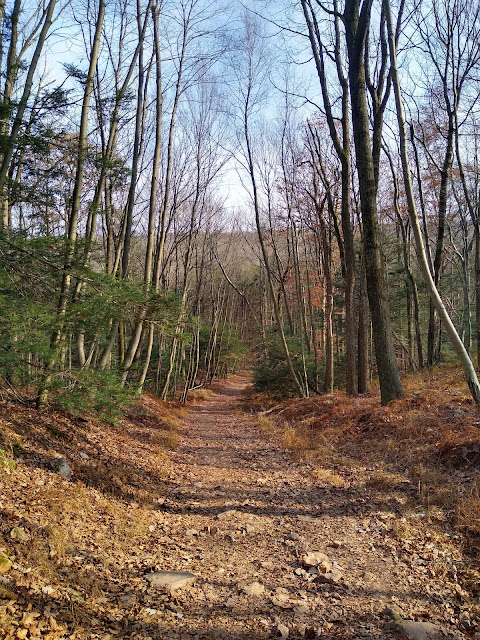 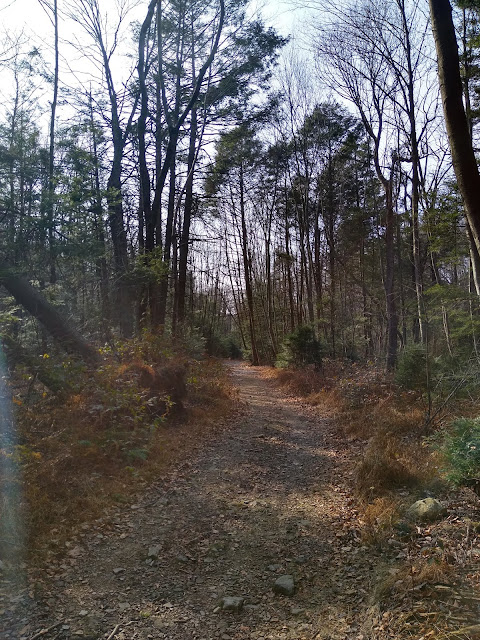 After 2.5 miles I came to an open grassy area that I later learned was used as a helipad. At this point I could go straight to continue on the AT or veer off to the left to the Furnace Creek Trail. I went left because I knew this trail would take me back to the parking lot. 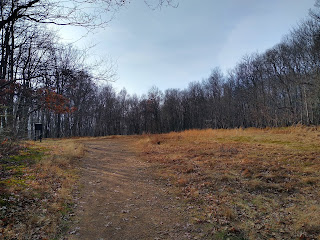 This new trail was also wide and was a gradual downhill. It went along Furnace Creek. There was lots of rhododendron, which I absolutely love! 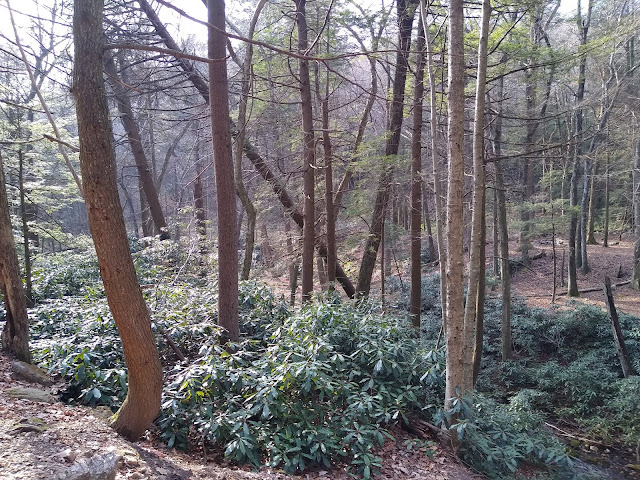 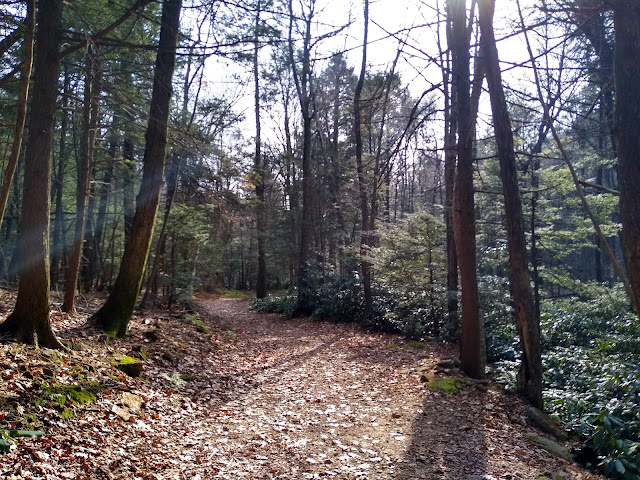 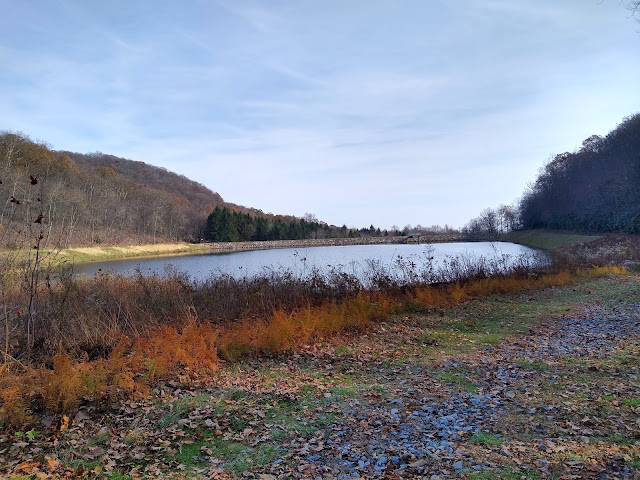 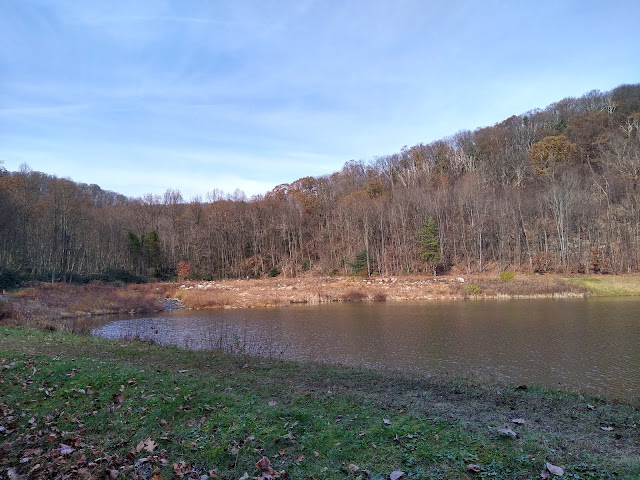 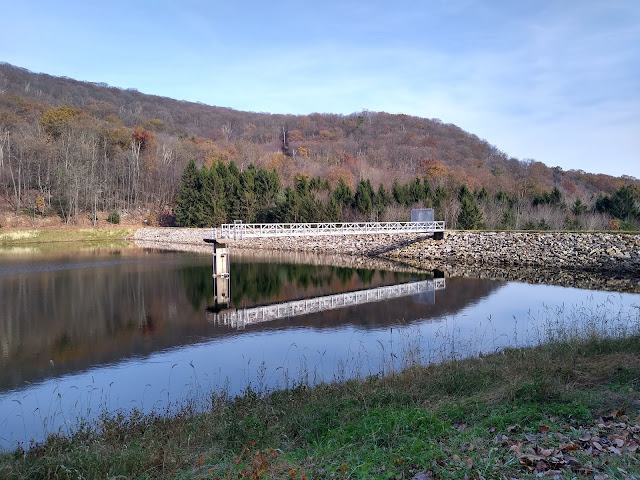 I can't tell you how enjoyable this run was! If you have the time and the physical capabilities, I highly recommend you checking our The Pulpit and The Pinnacle! This link gives you some helpful information on planning your day! 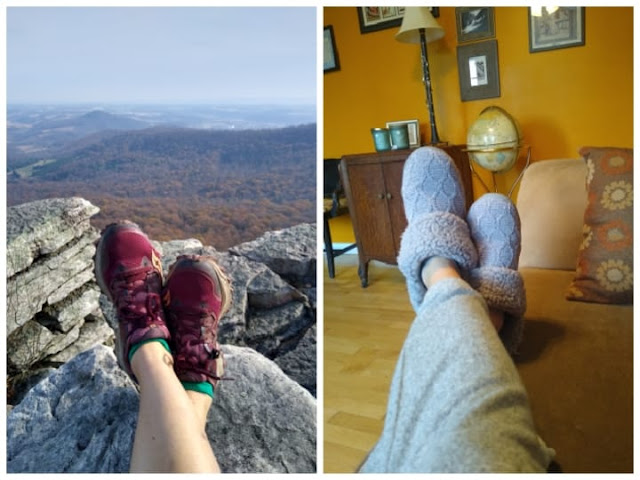 I spent the rest of the day relaxing. What a difference two hours makes!